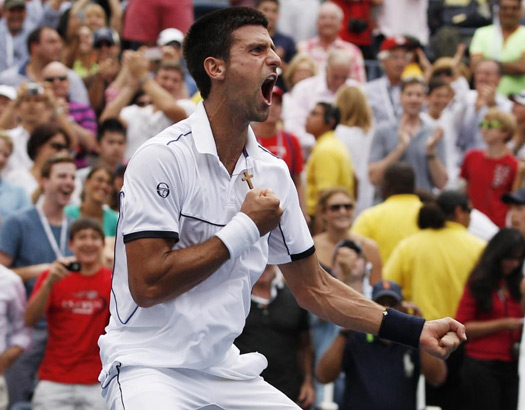 Nole’s comeback in the US Open semi-final match against five-time champion Roger Federer is the top comeback of the 2011 season.

Novak had come back from a 0-2 sets deficit just once in his career – also at Wimbledon, in 2005, against Guillermo Garcia-Lopez, a victory that lifted him into the top 100 for the first time.

In September 2011, as the world no. 1, Nole roared back to force a decider with service breaks to start both the third and fourth sets. Roger regained the lead in the fifth, breaking Novak’s serve in the eight game and setting up two match points, a situation they’d found themselves in 2010. In that match, Nole had come up with two winners, down 4-5, 15/40, and had admitted afterwards:

“To be honest I was just closing my eyes and hitting forehands as fast as I can on the match points.”

This time, he saved the first match point, returning a 108 mph serve with a forehand winner that caught the line, and a second when Federer’s forehand bounced off the netcord and wide. With the crowd loudly saluting Nole’s efforts, the Swiss followed with a double fault on break point chance for the 24-year-old Serbian. He was unable to recover, conceding another service break as Novak proceeded to seal the victory on his first match point.

“I had to take my chance,” said Nole, who defeated Nadal in the final to lift his first US Open trophy. “I was very close to being on my way back home. He was serving. He was 40/15 up. I managed to hit that amazing forehand return which got me back. I got a little bit of energy from the crowd, and I fought back.”