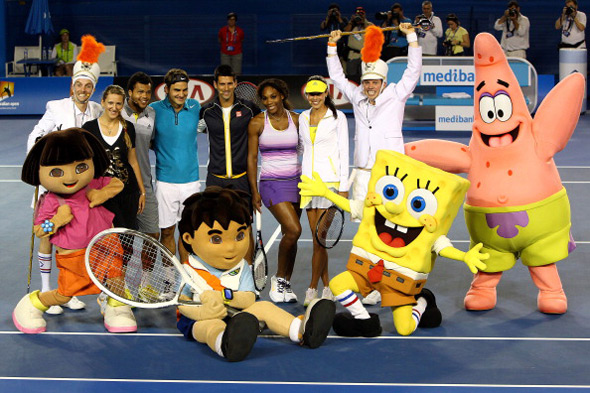 Melbourne Park was packed on Saturday as it hosted the biggest and best Kids Tennis Day yet.

Thousands of youngsters and their families took part in the day enjoying the vast number of activities both on and off the court.

When the clock struck 12noon the main attraction of KTD2013 kicked into action – the ‘Rod Laver Arena Spectacular’.

Novak Djokovic, Roger Federer, Victoria Azarenka, Jo-Wilfried Tsonga, Serena Williams and Ana Ivanovic took part in the memorable exhibition in a stunning line-up that gave young kids the chance to get up close to their heroes.

The stars showcased an array of trick shots, jokes and their own running commentary, thrilling the crowd.

Nole – well known for his showman qualities – had the crowd roaring with laughter. The fans were entertained with his high-pitched and excessive grunting and his brief rendition of the Gangnam Style dance.

On the other side of the court, Federer was more than happy to put his racquet down and take on ballboy responsibilities while Tsonga showed off his ability to fire shots from deep in the court – through his legs.