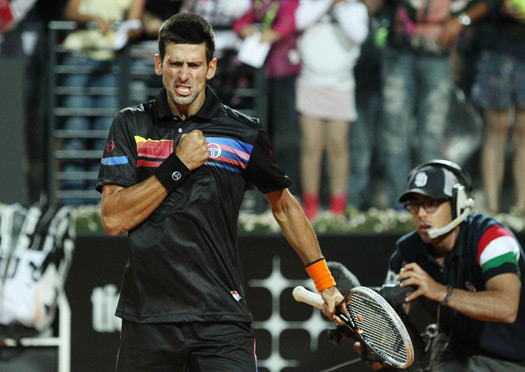 In the classic match at the Internazionali BNL d’Italia, Andy came close to ending Nole’s then-37-match winning streak, but was ultimately denied by the 24-year-old Belgrade native, who had forgotten how to lose.

After the semis, doubles world no.1 player Bob Bryan tweeted: “Just watched some of the greatest displays of shot-making & guts I have ever seen. Thank u @andy_murray & @DjokerNole. You are both champs.”

Nole’s victory over Nadal in the Sony Ericsson Open final (4-6, 6-3, 7-6) is ranked the second best ATP World Tour match of the season.

Novak came from a set down and prevailed in a decisive tie-break. Both players received a standing ovation from the sell-out 14,625 Miami crowd.

After being named the 2011 ITF World Champion, Nole has also been voted the Balkan athlete of the year. The Serbian star won the award on Tuesday ahead of Croatian skier Ivica Kostelic and Bulgarian marathon swimmer Petar Stoychev in a poll organised by 11 national news agencies from the region.