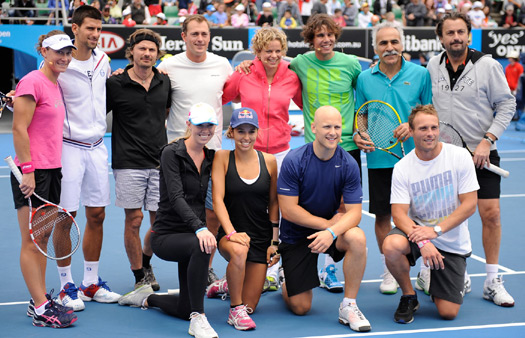 An exhibition match as part of the Kids Tennis Day ahead of the Australian Open has taken place at Melbourne Park today.

Thousands of youngsters brimming with excitement queued up early this morning to take part in a unique experience, to meet their favourite tennis players and have a hit on the famous Melbourne Park courts.

Nole, Rafa, Sam Stosur, Kim Clijsters, Maria Sharapova…entertained the crowd, the kids were having a great time, it was a great way to promote the sport.

The world no.1 shared his goals at the press conference after the exhibition. 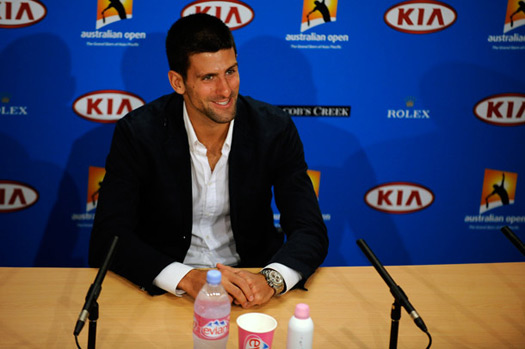 The 24-year-old Belgrade native is keen to repeat triumphant year and expects another top tennis season.

“I think everything is possible. Obviously 2011 has been the best year so far in my career. It’s going to be very difficult to repeat what I have done. But, look, I’ve done it once. Why not twice? Why not staying optimistic and positive about the whole season? “

“Every single tournament I won last year gave me a lot of confidence. Like everything in life, in tennis as well, you need to have a high confidence level. When you’re playing on it, it feels like nothing can stop you.”

Mubadala World Tennis Championship tournament in UAE was a good warm-up for the new season and it showed that Nole is fresh and hungry to win as he has been throughout the 2011.

In the off season, the Serbian star had two weeks of the real rest, without racquet, without any physical involvement.

“It came at the right time really. I needed it more than anything at that stage. I had time to reflect on what I have achieved in 2011.”

“In two or three weeks’ time that you have before the new season starts, you always try to specifically work on some shots, try to improve them by a percentage that is possible in that time. I don’t think that in general my game should be changed or that I should take any major changes in it. I just think that I have to keep that consistency of performing well, work on some things, maybe to get more often to the net, work on my serve a little bit more.”

The Olympics are one of his biggest priorities this year. Nole could play doubles as well.

“I had that privilege and honor to represent my country in 2008 Beijing Olympics. It was a remarkable experience, like no other. I’m very happy to be representing my country again and going back to the Wimbledon grass where I played grass in 2011, achieved one of my biggest goals. So I hope that I can play well, perform well and bring a medal to Serbia.”