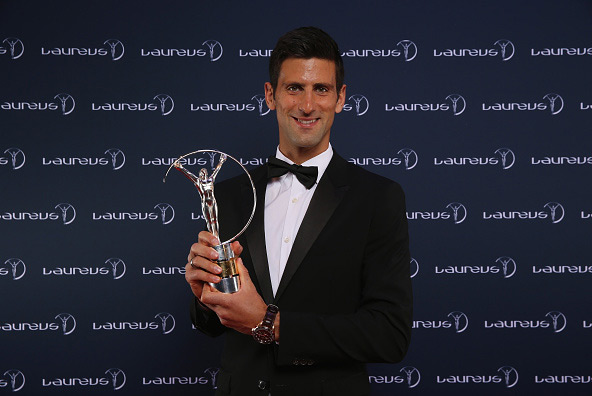 Serbia’s world no.1 tennis player Novak Djokovic has been named the Sportsman of the Year at this year’s Laureus Sport Awards!

Djokovic was presented with the Laureus statuette by Laureus Ambassador Nico Rosberg.

“Thank you Laureus academy members for voting for me, and sports media representatives for nominating me,“ Novak said. „I am very humbled and honoured to stand here tonight with such a prestigious recognition in my hands. I am very grateful that love and passion for tennis and sport has given me an opportunity to contribute to change. Sport is more than just a game. It unites us, gives children on the streets a higher purpose and goal to aspire to; it teaches us fair play; it teaches us how to raise to occasion and overcome fear, weaknesses and doubts. We are all acting as a team. I can only speak from my personal experience and say that IT IS possible to achieve great things no matter where you come from, no matter how little or nothing you have. With all of our human imperfections and limits – we CAN DO great things in any field of life. I chose tennis as my vehicle. It is my love and my biggest passion. With a lot of work and belief I got here and you can do that too. As I stand here tonight, wearing snickers for good, I hope to invite you all, no matter what shoes you chose to wear in life: TO ALWAYS WEAR THEM FOR GOOD. Thank you Laureus for helping children around the world achieve their potential. And thank you for inspiring me.“

The nominees were selected by the Laureus Media Selection Panel, consisting of leading sports editors, writers, broadcasters and online journalists from around the world. The winners were chosen by the Laureus World Sports Academy, the ultimate sports jury, made up of 50 of the greatest living sportsmen and sportswomen.

Novak won the prestigious award for a third time. He was previously voted 2011 and 2014 Sportsman of the Year.

Largely considered “the Oscars of sports”, the Laureus World Sports Awards are given annually since 2000 to sportspeople who have been outstanding during the previous year.

Proceeds from the Laureus World Sports Awards directly benefit and underpin the work of the Laureus Sport for Good Foundation, which supports more than 150 community sports projects around the world. Since its inception, Laureus has raised over €100 million for projects which have improved the lives of millions of young people through the use of sport.