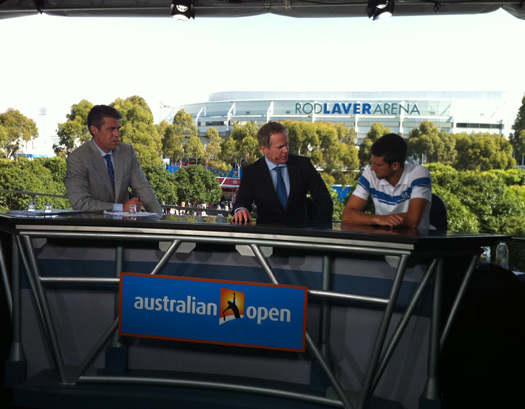 07. 02. 2011. · Ultimately, the most significant storyline coming out of the Australian Open was not another tepid performance by Andy Murray in the men’s final (though he showed zero mental toughness), the inevitable decline of Roger Federer (haven’t we heard that one before?) or even the latest injury that ended the possibility of a historic Rafa Slam (Nadal hurt? Who could have seen that coming?).

It was the dawn of the dominant Novak Djokovic era.

Never mind that Djokovic needed 12 tries before bagging his second grand slam after winning the 2008 Aussie Open, the second longest drought (Marat Safin is No. 1) between a player’s first and second slam in the open era. He’ll need much less time to win his third and his fourth.

After racing through the draw with the loss of only one set, Djokovic finally fulfilled the promise that appeared certain a few years ago. As a shotmaker, the guy is the first player in modern history without a weakness.

He can rip backhand and forehand winners crosscourt or down the line from anywhere on the court. He has nice touch. His return of both the first and second serve is as good as anyone in the business. He moves like a gazelle, and his defensive skills are extraordinary. He wins free points off his resurrected first serve. His deep second serve is hard to attack. His volley is solid.

No one else possesses that total package.

Nadal struggles with his first-serve return, particularly on faster surfaces. Federer can be overpowered on his backhand side. Murray does not hit with enough pace on his forehand.

With Djokovic’s arsenal, it is a wonder anyone thought Murray had a chance in the final. Their respective form in the previous two rounds screamed out “straight-sets victory.”

Djokovic crushed Thomas Berdych, who had played flawlessly to reach the quarterfinals, and outclassed Federer, who had won 27 of his last 28 matches entering their semifinal.

Murray needed four sets to dispatch 46th-ranked Alexander Dolgopolov in his quarterfinal and was one point away from falling down two sets to love to David Ferrer in the semifinals. Ferrer, a grinder without a killer shot, yanked Murray around the court for almost two hours before remembering he was a second-tier player and faltering in the second-set tiebreak.

Yet, the consensus expectation for the final was of an all-out war that would be decided by only a few points. ESPN’s Brad Gilbert even predicted a five-set win for Murray because of his variety and stellar net play.

One problem. It is nearly impossible to get to the net when your opponent is djerking you around the court from start to finish.

Djokovic set the tone by taking the first six points, winning one on a perfectly placed serve, another one after a ridiculous retrieval with a defensive lob and the last with a scorching forehand down the line to break open a neutral rally.

Although Murray hung tough for eight games, Djokovic broke his will at 5-4 on a fantastic 39-shot rally that had both players running from side to side. The battle ended with a winded Murray sending a feeble passing shot into the middle of the net, giving Djokovic two set points.

Murray sent a forehand long seconds later to lose the set, then went away.

Djokovic is here to stay.

He had the ability all along, but numerous problems slowed his development. Physically and mentally, he was nowhere near as tough as Federer or Nadal, withering in hot weather and wandering aimlessly through other matches. Technically, his serve deserted him, as he developed a hitch in his pitch. Last year, he had the smallest differential between aces and double faults of any player in the top 50.

Yet, through all those tribulations, he remained No. 3 in the year-end rankings from 2007 to 2010, a testament to his all-around talent. Almost anyone else would have fallen out of the top 10 with his serving woes.

The serve is fixed, and barring injury, it is hard to imagine him staying at No. 3 by the end of 2011. Even with two of the best players in tennis history trying to hold him back, he is too good to stay stuck in place.