Novak celebrates 142nd week at No.1 in Emirates ATP Rankings 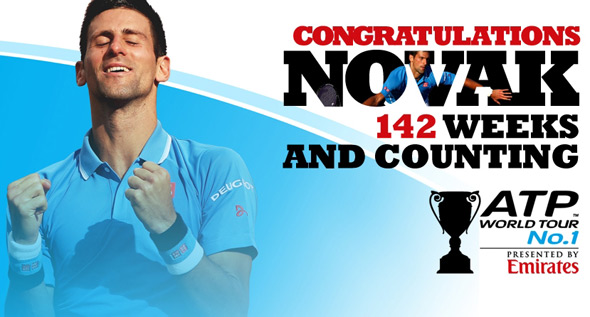 Today, Novak has moved into outright sixth place in the list of players who have spent the most weeks at No. 1 in the Emirates ATP Rankings.

Djokovic has been at the top of men’s professional tennis for 142 weeks, one week more than Rafael Nadal, and now he has his sights set on John McEnroe on 170 weeks.

With a 4,310 point lead over No. 2-ranked Roger Federer in the Emirates ATP Rankings, if the Serbian were to maintain his firm grip on No. 1, which he reclaimed on 7 July 2014, he would start his 171st week at No. 1 on 9 November this year.

His compatriot, Janko Tipsarevic, believes that Djokovic’s mission is far from over.

“If you ask me personally, his goal, even though it seems far from now, is to pass Federer,” Tipsarevic told ATPWorldTour.com. “I think that his goal is to be the best player of all time. I am so happy and proud that he has taken the sport to another level. He did it in the era of Federer and Nadal, the best tennis players in the sport’s history. All of a sudden this guy comes out of nowhere and raises the level even higher, when everyone thought it couldn’t go higher than these two guys.”

The statistics prove it. Although he had won the 2008 Australian Open and five ATP World Tour Masters 1000 trophies, Djokovic’s first truly great year was in 2011, when he first became No. 1 on 4 July. Ever since, Djokovic’s business has been winning tennis matches.

Since 2011 to today’s milestone, he has compiled a 305-39 match record and won 33 of his 51 trophies to date. He has won seven of 17 Grand Slam titles and finished runner-up in another five. He has also taken home 17 trophies from of a possible 35 ATP World Tour Masters 1000 tournaments that he has contested (134-17 match record).

“He’s the best tennis player at the moment,” Ferrer told ATPWorldTour.com. “He’s playing with great confidence in his shots. His fitness and physique are unbelievable. He’s very fast. He has everything – a very good range of shots – and is able to mentally focus on every point.”

Widely considered to be one of the greatest returners and movers in history, Djokovic continues to push every other player to compete better. With Marian Vajda and Boris Becker, he has developed an ability to quickly breakdown and nullify strategy, to win when not playing at his best. These are trademarks of all great players, like Federer and Nadal, who he will battle this week in Monte-Carlo.