Novak for Blic: Wimbledon title is my no.1 goal! 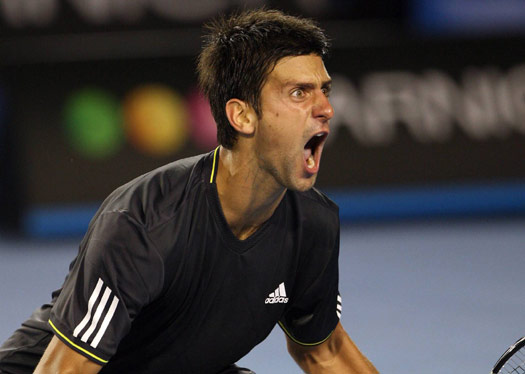 30. 04. 2009. · He impersonated his tennis colleagues in Melbourne; he showed he could be a pop star when he sang the famous Gloria Gaynor hit “I Will Survive” at the French Open.
It is a secret for everyone what Novak Djokovic, a Serbian tennis icon and the person responsible that Serbia got the chance to organise an ATP event, will do if he has a chance on May 10, to take his 13th career title on clay in Belgrade.

The guy who spreads the glory of Serbian tennis all over the world says he’s ready for the biggest challenges and the first big test in front of his home crowd. He says he’s always wished that the best world players come to his hometown Belgrade, and his wish has come true.

- I’ve mentioned on many occasions what Serbia has been going through in the last fifteen years. The tennis has risen from the ashes here by a combination of circumstances, but also thanks to the enormous efforts and sacrifice of the players’ families. I’ve always wished that we give Serbia an event like this, because bringing the world’s tennis top players is the best way to work on our tennis tradition.

How did the negotiations go with the representatives of the Amersfoort ATP tournament?

- People from Amersfoort were very cooperative right from the start. The crucial moment was in Shanghai, when we were approved the organization by the ATP director. I was surprised and extremely happy how quickly they accommodated us and supported us. That is a sort of confirmation for me as an athlete.

How did you make contacts with the players that are coming to Belgrade? Did you personally invite them?

- I invited some of the players that I am friends with. Some of them called in themselves when they heard of the tournament. This is only the first year, and I expect better tennis names with every new edition of the Serbia Open.

What does it mean to you to play at the strong ATP event in front of your home crowd?

- That is something I haven’t experienced before. I know how special it is when I play the Davis Cup ties in Belgrade. All I can say is that I am really excited, and I am sure the feeling will be incredible.

Who do you think the fans in Belgrade will support the most of all the home players?

- I really don’t know. It’s something variable. One day they cheer for one player, and the next day for someone else. The more players from Serbia participate, the better. It means the chances that a home player wins the event will grow.

If you win the title, do you already know where you will celebrate it?

- On the court in Dorcol.

Will we be able to see more top 10 players appearing at the Serbia Open next year?

- As I’ve already said before, the first year is the hardest for an event, just like any fresh start in life. That’s why it’s important that everything goes smoothly now, then tennis coaches all over the world will place the Serbia Open in the calendars of their players at the start of the season. I hope that some of our players will enter the top 10.

Do you know Roger Federer and Rafael Nadal off court? With whom of the foreign players you have the best relationship?

- My true friends are the people I’ve known since school, but it’s important that players respect each other. I must say I have the best relationship with Serbian players.

If you could choose, which Grand Slam event would you prefer to win next?

- Wimbledon. The tournament has an enduring tennis tradition and I remember watching Pete Sampras’ matches on TV as a child. Those were really memorable moments.

Your game this season is more diverse, and the focus is on the serve-volley approach. Is that a secret preparation to attack the Wimbledon trophy this season?

- That is the element of my game I need to work on. I am glad that people have noticed that and that the effort is paying dividends.

You are famous in the world of tennis as one of the rare players who is capable of leaving behind all the poor moments of a game. How do you find an exit from a difficult situation and how do you manage to turn a match in your favour?

- I try to be in the control of the match. It is extremely important not to allow yourself to play your opponent’s game. People often think I play too defensively, but I have the control over the match even when I’m hitting some defensive shots. You need self-confidence for that, which sometimes varies though.

How do you react to some comments that you have “outgrown” your coach Marian Vajda and that it is time to hire a better known name. What is the secret of your successful cooperation?

- It’s one thing to be aware of what changing your coach would do, and another to actually implement it. It’s like changing your racquet. Marian suits me because he can balance when we focus only on tennis and when we leave tennis aside and have a laugh. Top tennis implies huge pressure and you need to have at least some time when you can relax.

Do you have time to watch the practice sessions and matches of your brothers Marko and Djordje, and do you advise them sometimes?

- Yes, of course. I try to point to some errors they make – the same ones I used to make. I wish to set an example for them – both tennis-wise and outside the tennis. That’s an additional inspiration for me – said the best Serbian tennis player at the end.

This is the map of the complex where the Serbia Open tournament will be played from May 2 until May 10: