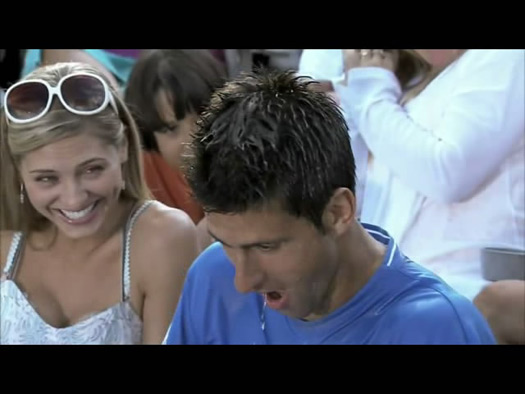 The song was first released before the Davis Cup final on Sportski zurnal’s website and it turned out to be a great overture as our team became the world champion for the first time in Serbia’s history.

“Great, thanks for the gift. We will all listen to it now. I am thrilled with the song. It’s really fantastic”, said Nole, adding sincerely that it’s a great privilege to be among a very few athletes who have song made in their honour.

Members of “Zone B” are huge fans of Nole and of Serbian male and female tennis players in general. For the occasion, the band consisting of five members: Duda Bezuha (author of lyrics and music), Zdenko Kolar (bass guitar), Dusan Ristic (drums), Dadi Stojanovic (guitar) and Petar Zarija (singer), were joined by Miroslav Cvetkovic from “Bajaga i instruktori”.

”Zone B” will enter the studio in January 2011 to begin recording their sixth studio album (eighth overall). “The Joker” will be a bonus track.

Certain jobs are very demanding,
lions heart and cool to rool the dice,
he is sometimes hot as chilly pepper,
but he can be as cold as the ice.

Joker always knows to play it right,
all over the world people cheer him up,
oh yeah, Nole.

He plays with tennis ball and with our hearts,
driving all the fans total nuts,
things get very nasty recquet’s broken,
then believe me some bad words are spoken.

But everything ends with his trade mark smile,
he is a very, very cool and ok guy,
oh yeah, Nole.