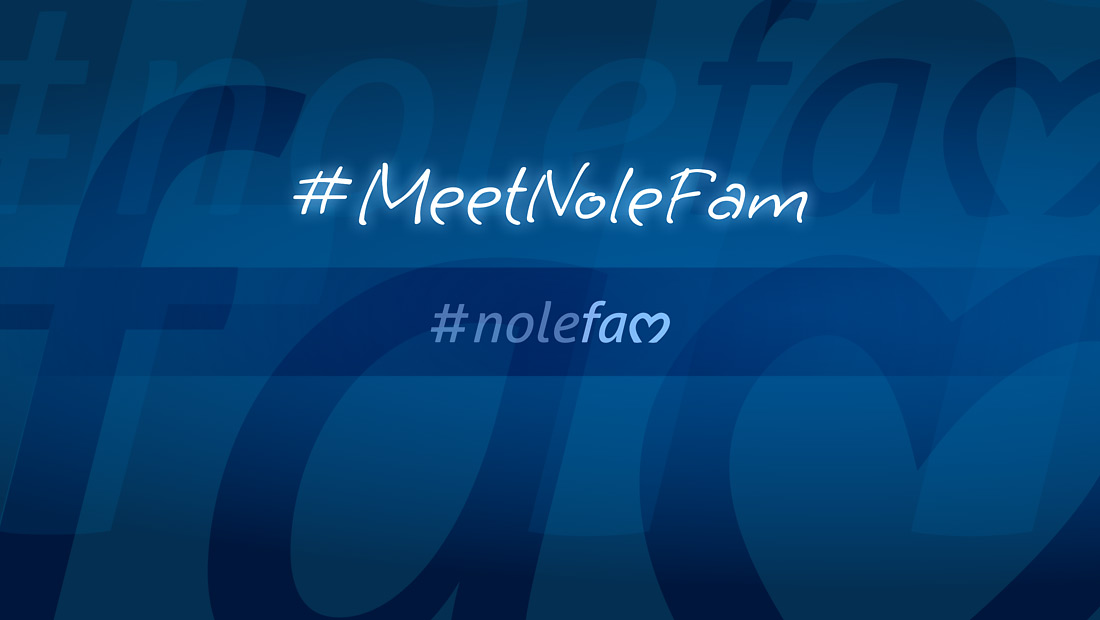 After six phenomenal months of our virtual travel around the world and getting to know the biggest #NoleFam groups, the time has come to close this year’s #MeetNoleFam interview series. For the final interview, we are going back to China to meet the second biggest NoleFam group of the country that shares similar traditional and family values to Serbia.

This NoleFam club is the association formed by a community of like-minded tennis enthusiasts. Everyone can be a part of the group as long as they support Novak. They believe in sharing the positive inspirations and want to be a bridge to connect NoleFam in China with Nole. They share the latest news, pictures and videos of Novak with the fans. Meanwhile, they also want to show their love and support to Nole. They organize some activities to improve the friendship among all the members, the biggest one is to watch Nole’s match in October in China.

1. This is the second time that #MeetNoleFam comes to China. The Chinese fans have always given huge support to Novak, how long and how many people do you have managing the China Fan Club?

There are 5 of us and we’ve been managing the China Fan Club together for around 5 years.

2. Would you like to introduce you and your team to us? How did you get to know each other and become united around the idea of running the club?

First, I want to introduce Jun, who is the founder of the fan club and has done lots of work, including designing our logo. And Adova is another founder of the club. Then there is Chang, who is mainly responsible for the management of our Twitter account (https://twitter.com/NoleFam_China). And Pete, who is good at editing videos and collecting news from the foreign media. And there is me, Pink, who is responsible for sharing the latest information about Nole with Chinese fans and organizing fan activities. I met Jun and Adova when we went to watch the 2012 Shanghai Rolex Masters. At that time, Jun already had the idea of starting a fan club as it would be easier for us to get news about Nole and get to know each other.

3. You are in close contact with many fans of Novak, among all of them, what’s the main topic of interest around Novak?

I’ve read the last several rounds of MeetNoleFam, many have mentioned Novak’s matches and certainly it’s always a main topic. But we also often talk about his character and his life attitude. We think he has a good sense of humor and he really knows how to make daily life more fun! He’s always positive and open minded. And I think his attitude toward life has already influenced many fans.

4. Besides staying tuned for Novak, what do you like to do in your spare time?

I like the challenge of learning new languages and now I’m learning Korean in my spare time. I also enjoy reading books (inspired by Jelena!) and I’m reading “Thinking, fast and slow” at the moment.

5. We all know it’s not easy to run a fan club, and there must be some memorable moments for you to manage it. We’d love to hear your best stories and moments from running the Club?

There have been many unforgettable moments during the last few years. One story I want to share happened in 2014. It was during the Italian Open and Serbia was hit by a terrible flood. Nole tried to call for people’s attention to support Serbia even though he was in the middle of a tournament. So as a part of his NoleFam, we thought we should show our support to Serbia as well. That’s one strong example that we are a big family. We encouraged fans on social media to contribute and share photos in which they held a paper printed with “Support Serbia”. Within 24 hours, we received more than 50 contributions. Then we made it into a video and shared it on social media. It is really great proof that NoleFam is one big family.
Another thing I want to share is that during the last few years, every time Nole came to China, we tried to get photos or t-shirts signed by him. Then through our fan club social media account, we would have a game and lucky winners can have the photo or T-shirt as a prize. Not all the China Nolefam can go to Beijing or Shanghai to meet Nole. The least we can do is try to get some small gifts for them so that they can feel a bit closer to Nole.

6. What is the biggest challenge that you have come across managing your club?

I think the biggest challenge is how to engage fans when there are no matches going on. As said earlier, his matches are the main topic of interest for us. We don’t want the ties between NoleFam to get weaker so we always try to figure out something to engage people during that time. For example, we would find some interesting or funny videos, which are mostly in English, and then translate with subtitles so that many more fans can enjoy them. Sometimes we have games just to create opportunities for fans to interact with each other.

7. NoleFam is the most special network for Novak. If you had to describe NoleFam in 5 words, which ones would you choose?

8. You’ve travelled many different countries to watch and support Novak, which tournament has been the most impressive?

No doubt it’s the 2016 French Open. Even today, I still feel like it’s a dream. Because my best friends and I were lucky enough to witness the historic moment at Philippe-Chatrier court. And Novak hugged us the next day when he went to have champion photo call at Place de la Concorde.

9. If you have an opportunity to organize a #NoleFam meet-up for all fans, where would it be held and what would it look like? What would be the highlight?

I think it would be held in Beijing and it would look like a party of friends. People can enjoy food and drinks, chat with each other, get to know each other, and become friends in real life. The highlight would be sharing our most unforgettable moments regarding Novak or other NoleFam.

10. You’ve supported Nole for such a long time, what has been your most unforgettable moment of Novak on the court?

French Open 2014, when he shared the umbrella with the ball kid on court. The video was actually going viral on China’s social media platforms. We were really happy to see that besides NoleFam, a lot more people can see what a great human being he is.

11. What are your TOP 3 suggestions and advice for all new fans that are becoming part of our family?

1) Believe in Nole. 2) Respect him both on and off court. And 3) Be tough as sometimes the matches are great challenges to your heart.

12. What was the first moment you met with Novak? And what made you decide to support him?

The first time I met Novak is at the Beijing Capital Airport in 2012 when he came to China Open. I knew that he was one of the best tennis players in the world but that’s not the main reason that I decided to support him for all these years. I remember that after the 2012 China Open final’s press conference, Nole had to go to the airport as he would fly to Shanghai. Though there was not much time, he still had a few minutes with some fans including me and my friends. That really means alot to us. I decided to support him because he never takes fans’ support for granted!

13. Now Nole is recovering from his injury, what would you like to say to him?

Enjoy lots of quality time with your loved ones :) A happy and healthy you is the most important thing to us. We will always be there for you!

14. What is your favorite photo of Novak, if you could choose one? :) 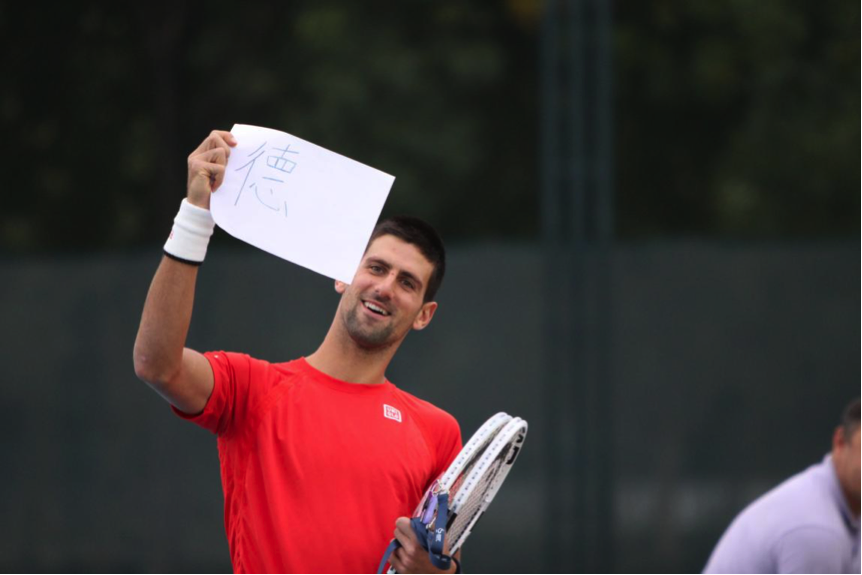 15. Nole has won many championships, which one was the most unforgettable for you?

2012 Australian Open. It’s an epic final between Nole and Nadal. I can still remember how nervous I was, as I was so nervous that night that I could only watch score updates instead of live on TV.

16. Novak and Jelena have devoted themselves to philanthropy, especially for children’s education. What inspired you to follow this foundation?

Personally, I always believe that education is one of the most important pillars of both individual’s and society’s development. Therefore, NDF’s work in improving children’s education attracted my attention in the first place. More importantly, the work NDF has done so far has brought real changes to children’s life in Serbia.

17. Novak Djokovic Foundation has launched many different projects so far, which is the most impressive one for Chinese fans?

I think it is the ORIGINAL magazine. One thing special about the magazine is that it leverages some celebrities (e.g. Hugh Jackman) who are great role models for young people. I think it is really a good way to communicate with young people. And as a magazine, it can encourage young people to truly read rather than stare at digital screens.

18. If you could organize an activity to help the children with Novak, what would you like to do?

I would like to organize a sports meeting for children so they can have a chance to try various sports. As Novak and NDF have emphasized, sports is a great way to help people both physically and mentally, especially for children. Through sports, they could not only have a better body, but also enjoy and have lots of fun, and learn to cooperate each other. Novak can teach the children simple tennis lessons and share with them what sports means to him.