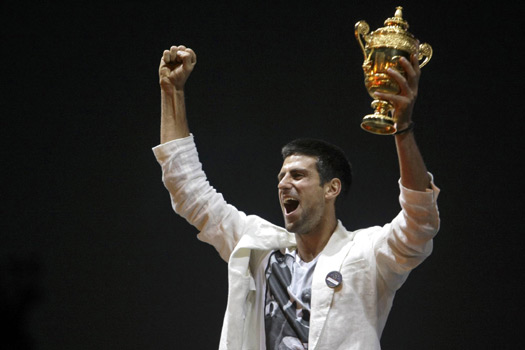 World no.1 Novak Djokovic was greated by 100,000 people in front of the National Assembly of Serbia in Belgrade on Monday.

Thousands of people lined up the streets as Novak, accompanied by his family and members of his professional team, drove from the airport in an open-top bus to the centre of the city, bringing traffic to a standstill and triggering ovations from citizens.

People got out of their cars on the main motorway to salute Serbia’s most popular athlete, whose entire family paraded alongside him on a giant stage where bands entertained the crowd.

“Nole, we love you”, “Nole the king”, the crowd chanted as Nole stepped on a stage holding a replica of the Wimbledon trophy.

“This is absolutely unbelievable and I owe all of you eternal gratitude for this reception,” an elated Djokovic said as he held the trophy he won with a fantastic four-set victory over Spaniard Rafael Nadal in Sunday’s final.

“The time has come to bare all my emotions to you and all I can say is that you are the best in the world because only Serbian fans can throw a party like this.”

“You have made the happiest day of my life even better and I will never forget it. I dedicate this trophy to you,” said Novak, who will lead Davis Cup holders Serbia in their quarter-final away tie against Sweden next weekend.

“I can promise you we will do everything in our power to win the Davis Cup again,” the 24-year-old Wimbledon champion added.

Nole thanked his parents and professional team for his success and brought even his grandparents to the stage. He asked his youngest brother Djordje, 15, also a talented tennis player, whether he could repeat Novak’s success and the boy replied to wild cheers of the crowd:

“Give me another nine years and I will bring you the trophy.”

“I’m the proudest mother in the world,” said his mother Dijana.

Djokovic and his two younger brothers then joined rock, pop and folk bands on stage singing, as fans lit flares and waved Serbian flags. Novak and his girlfriend Jelena sang and danced to the tunes of “Tap 011”, Miroslav Ilic and Vlado Georgiev.

The excitement culminated when Nole and his family engaged in a traditional Serbian folk dance as fireworks lit the skies above Belgrade on a warm evening.

The celebration continued at Novak Cafe & Restaurant in Dorcol. 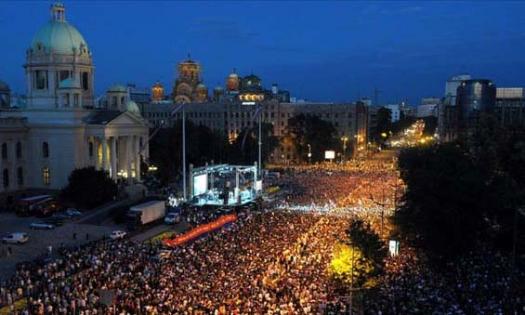 Here are some nice Tweets:

Gustavo Kuerten: What an Amazing reception for @DjokerNole back home!!! Congrats my friend, u deserve it all!!

Wimbledon: Many congratulations to @DjokerNole, our men’s champion for 2011. What a homecoming he was treated to!