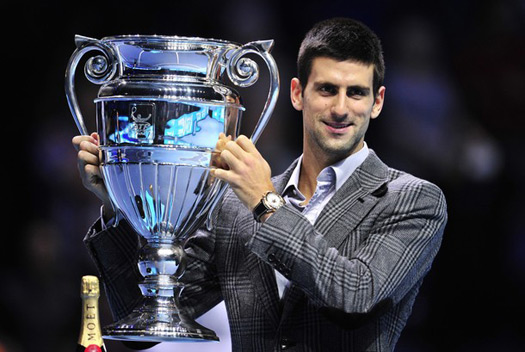 The 2011 season is completed with the last night’s final of the Barclays ATP World Tour Finals in London.

Nole finishes this unbelievable year as the world no.1 to become the 16th different player to finish as no.1 in the history of the ATP Rankings (since 1973).

Nole will take a well deserved rest and then start preparing for 2012 season in which he will face big challenges – a great number of points to defend and keeping the position no.1.

“Hey everybody! Season is officially over for me. Wanted to thank you ALL for such a great support and so many wonderful wishes. I wish I could have been in better form for the last tournament but as I said before – everything happens for a reason. I am more than happy with everything that me and my team have achieved this year, and I will treasure and value this experience forever. Now I will rest well and soon start with preparations for season 2012. Once again, thank you for being my fans and friends, having your support throughout the year was a very important “ingredient” of the “winning formula” ;). “