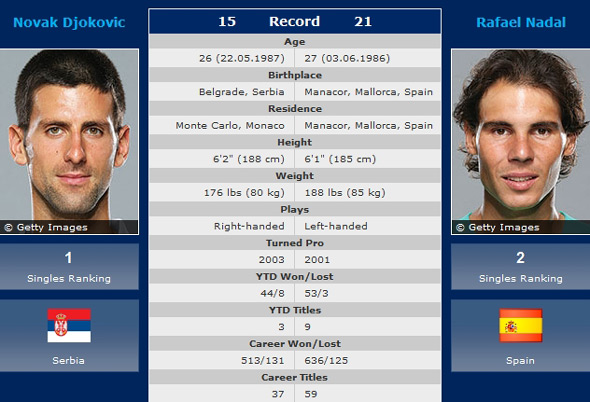 World no.1 Novak Djokovic and no.2-ranked Rafael Nadal will meet for the 37th time, the sixth time in a Grand Slam final and the third time at the US Open, on Monday at 17.00 local time (23.00 CET).

Most people agree it is the best tennis rivalry in the world. Nadal leads the overall series
21-15, though Djokovic has an 11-6 edge on hard courts.

On facing Rafa in the finals, Novak said: “It’s always the biggest challenge that you can have in our sport now. I mean, he’s the ultimate competitor out there. He’s fighting for every ball and he’s playing probably the best tennis that he ever played on hard courts. He’s very confident, but I know how to play him. Hard court is my most successful surface. I have played him already here twice in the finals. I know what I need to do. Now it’s of course easier to sit here and say, I know what I need to do, but I’ve got to do it on the court. I will give everything I have for the trophy.”

“I prefer to play against another one (smiling). We always played very exciting matches. When you are involved in these kind of matches, you feel special. Even if I lost that final in Australia, I felt happy I was involved in it. Semifinal in Roland Garros this year was very emotional, too. Few weeks ago in Montreal, we produced a very good level of tennis. It’s good for both of us, we play at high level and matches become great because we play long rallies, we bring our game to the limit situations. I hope to be ready for that,” the no.2 seed said ahead of the historic match.

The top two players in the world will go to No.1 on list of great rivalries in Open Era when they meet on Monday, beating Lendl/McEnroe and Connors/Lendl (36).

Nole will look to win his 38th career title, while Rafa is biding to win his 60th crown.

With a history of thrilling meetings between the two, the 2013 US Open final promises to be yet another classic!