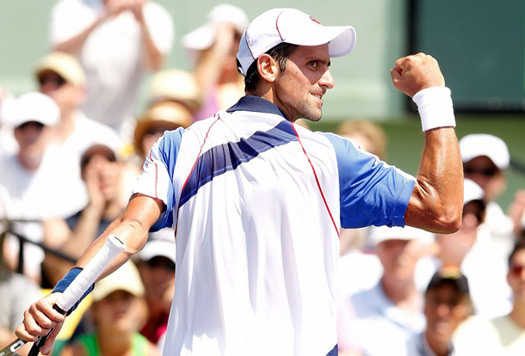 With the title at the Sony Ericsson Open in Miami, Novak has consolidated at number two in the ATP Ranking list.

The best Serbian tennis player has been rewarded with 990 points (he lost in the second round last year) and he now has 9,700, which is 1150 more than Federer whom he beat three times this year. The 23-year-old Belgrade native has 3,170 points less than top-ranked Nadal, whom he defeated in the first two Masters tournament finals of the season.

Nole is first in the ATP race list, which leads to the ATP World Tour Finals in London. He has 4,725 points, and is followed by Federer and Nadal with 1,990 and 1,690 points.

After a one week break, Nole will continue his phenomenal year on clay season. The next stop for our champion, who has improved to 24-0 in 2011, is Monte Carlo, the third ATP World Tour Masters 1000 tournament of the season, which begins on April 10.

“I know I had the best start of the season, no question about it. It’s the best four months in my life,” Djokovic said. “But it’s only the start of the season. I think it’s a bit early to talk about getting that top spot in the rankings. It’s still quite a big difference. Rafa is definitely the best player in the world now.”

For Novak to get that top ranking he knows he needs to carry his early-season hard court form over to the European clay court season and beyond.

“If I want to have a shot at the number one ranking, I need to play consistently well throughout the whole year. We all know that clay court is his (Nadal’s) favorite surface, but these wins are going to give me a big confidence boost for the upcoming clay court season.”

Rafa sees the situation differently given the Serbian’s recent form.

“I think he’s going to be no.1,” he said. “I don’t feel like he’s breathing on my neck, but he won two tournaments in a row right now, very big tournaments and one grand slam. The normal thing is he will be number one in the next month and a half, two months. I don’t know, it depends on my results on clay,” said Nadal. “But I am going to fight for me. If I am solid, if I play a very good clay court season, we will see what the situation is afterward.”