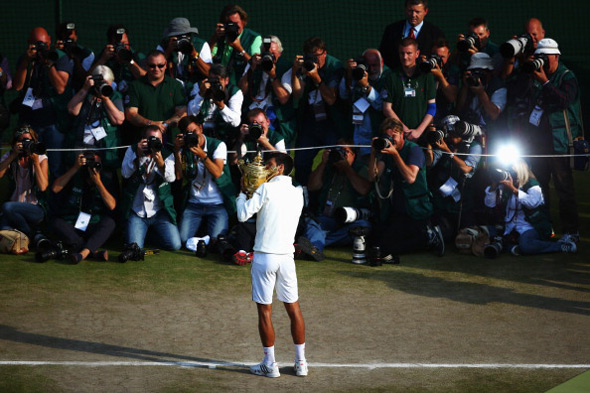 The 2014 Wimbledon champion Novak Djokovic returned to the top spot for the first time since October 2013. He begins his 102nd week at world no. 1.

With a magnificent victory over Roger Federer in The Championships final on Sunday, the Serb reclaimed the no.1 spot from Rafael Nadal.

Novak said his mental strength was the key to winning Wimbledon for a second time, describing his five-set victory over the seven-time titlist Roger Federer as the “best grand slam final I have played in my career”.

Last year, Novak finished runner-up to Andy Murray, so now he’s been awarded with additional 800 points for winning the title.

In the ATP Race to London List, Djokovic is on top with 7,250 points and he has officially qualified for the Barclays ATP World Tour Finals, taking place at The O2 in London from 9-16 November.

“It feels great not only to win Wimbledon again but also to return to No.1 in the ATP Rankings,” Novak said. “I got to No.1 for the first time in my career after winning Wimbledon in 2011, so it is nice to do it again here. I can’t wait to return to London to defend the Barclays ATP World Tour Finals title. I have had a good run there in the past two years. I really enjoy playing at The O2.”