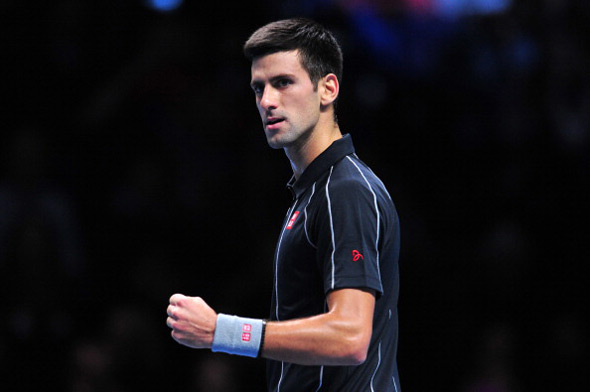 Novak is through to the final of the Barclays ATP World Tour Finals for the second straight year!

The defending champion needed 84 minutes to beat Stanislas Wawrinka 6-3, 6-3 and claim his 15th win in their 17 meetings.

Djokovic suffered a break in the third game but he stormed back by breaking straight away and once again in the eighth game. The Belgrade native wrapped up the opening set 6-3.

Novak produced a superb performance in the second set, confirming his excellent form. He broke Wawrinka twice to seal a brilliant straight-sets victory.

“It was a very enjoyable match for me,” said Novak after extending his unbeaten run to 21 matches. “The performance was definitely by far the best I’ve had in the tournament. I want to congratulate Stan for a great season and a great week and I want to wish him all the best for next season.”

Novak has an opportunity to win his third title at the season finale on Monday (21.00 CET), when he faces top-seeded Rafael Nadal. The Spaniard defeated Roger Federer 7-5, 6-3.

It will be the pair’s 39th career encounter. Rafa has a 22-16 edge over Nole, who won their last meeting, in the final of the ATP 500 event in Beijing.

Ahead of the Monday final, Djokovic said: “It’s going to be a great final. I hope the crowd will enjoy it because it’s always a thrilling competition between me and Rafa. Let’s say we know each other quite well. There’ll be no secret between us on the court. The better will win.”