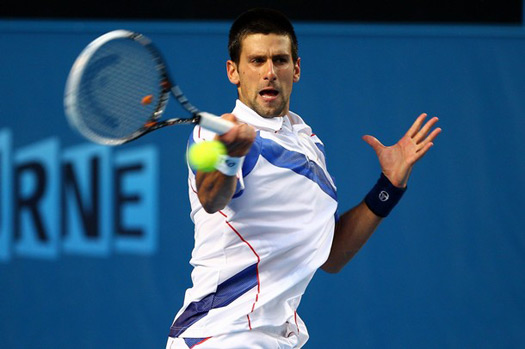 The 23-year-old Serb broke his opponent’s serve in the eighth game for 5-3 lead in the second set, but was broken back immediately when serving for it. Dodig equalised to 5-all and the set went to a tiebreaker.

Djokovic had one set point at 7-6, but Dodig survived and used his third chance to clinch it 10-8.

The 2008 champion gathered his momentum and raced through the third set with three breaks, in the first, third and fifth games, for 6-0 in just 28 minutes.

Novak eased towards the end of the match with two more breaks of serve and served it out 6-2.

“Maybe the positive thing about this match is I was challenged, pushed to the limits in the first two sets and stayed around three, three and a half hours on the court”, said Nole after the match.

“I’m not physically tired. I didn’t have any lead up to Australian Open. I was playing Hopman Cup couple of the matches. But I feel good on the court. Today in the first two sets I wasn’t happy with the way I was playing. Definitely wasn’t my best. It’s better for this to happen just now in the opening rounds than later.”

Djokovic served 9 aces to Dodig’s 8. His first serve winning percentage was 65 per cent.

He made 50 unforced errors, while Dodig had 39.

Here’s what Nole said about his next opponent: “We played couple of times last three, four months. He’s definitely on a roll, playing really well. Won his first tournament of the career in Moscow last year and now finals in Sydney. He has a big serve. We know each other very, very from the Davis Cup and from junior days. We grew up playing tennis. So it’s going to be a tough third round definitely for both of us.”