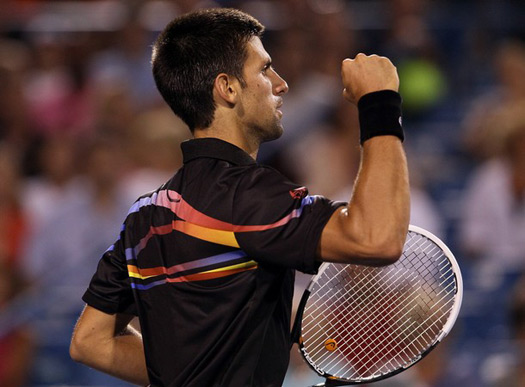 Nole is into his third Cincinnati finals!

Novak took the first set 7-5 when no.8 seed Czech Tomas Berdych retired after 52 minutes of play with fears of aggravating an injury.

The top-seeded Serbian star started with an excellent opening service game. Berdych responded in convincing fashion. The Czech faced a break point in the fourth game but held with a couple of big-hitting serves. Nole was broken in the seventh game. Berdych was serving for the set in the tenth game when the world no.1 fought back to level the result. Nole raced through his service game to love, and then put the pressure on Berdych who produced four unforced errors to lose the set. The Czech then decided to pull out.

“It’s great I’m in another final. It’s a great achievement. Tomorrow I’ll try to get another title,” said Novak. “I hope it’s not going to be too hot and let’s hope for another good match. We have a good rivalry, same age, same generation and it’s nice to play him in a final again.”

The 24-year-old Belgrade native has dropped only one set so far, to no.6 seed Gael Monfils in the quarter-finals.

Nole added one more victory to his stellar record in 2011 and he now has a sizzling 57-1 match record on the season.

“I have a great rivalry with Andy,” Novak said. “He struggled the first couple of months after Australian Open, but I think he’s back. This is a surface he plays well on. We played the finals here, and he won that. He knows what it takes to win a big match, a big tournament. So there is no favorite tomorrow.”

Djokovic, the 2008 and 2009 runner-up, is gunning for his first Cincinnati title and tenth ATP trophy this year.