Brilliant Nole and Janko down Czechs! Serbia is in DC finals! 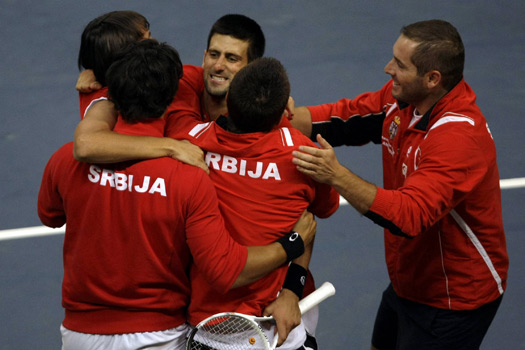 Serbia is in the FINALS of the Davis Cup by BNP Paribas for the first time in its history! Serbian team defeated Czech Republic 3-2 in packed Belgrade Arena.

In the first match of the day, Serbian no.1 Novak Djokovic brought the second point to Serbia with a 4-6, 6-3, 6-2, 6-4 victory over world no.7 Tomas Berdych to level the score against Czechs in their semi-final tie on indoor hard court in Belgrade.

The match lasted 3 hours and 14 minutes.

A break in the seventh game of the opening set was enough for Berdych to take it 6-4.

World no.2 found his rhythm in the second set. The US Open runner-up overcame an injury scare, played bravely and aggressively and took the initiative. He broke his opponent’s service in the eighth game and won the set 6-3.

The 23-year-old was dominating in the third set. He made a double break for 4-1 lead. Berdych broke back once for 4-2, but Nole put the pressure on the Czech, broke for the third time and closed the set 6-2.

Djokovic made a crucial break in the ninth game of the fourth set and served out the set and match 6-4 to keep Serbia’s hopes alive.

Janko Tipsarevic thrilled 18000 fans in Belgrade Arena when he clinched the third point for Serbia for 3-2 win over Czech Republic and a place in the finals of the Davis Cup!

The Davis Cup by BNP Paribas final between Serbia and France will take place in Belgrade from 3 -5 December 2010.