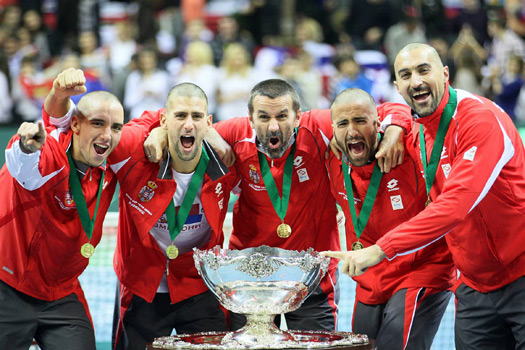 In the first match of the day, Serbian no.1 Novak Djokovic brought the second point to Serbia with a 6-2, 6-2, 6-4 victory over world no.12 Gael Monfils to level the score against France in their final tie on indoor hard court in Belgrade.

The match lasted 2 hours and 14 minutes.

Novak opened the match with a love service game. He made a break already in the fourth game and then consolidated the break for 4-1 lead. The world no.3 faced scare in the seventh game, but held to keep the advantage. He put the pressure on Monfils, earned two break/set points and capitalised on the second to take the set 6-2 in 35 minutes.

Nole continued playing great in the second set, not giving his opponent any chance. The 23-year-old from Belgrade clinched a break of Monfils’s serve in the sixth game as the Frenchman hit his backhand long. The Serbian no.1 won a long rally in the eighth game to set up three break/set points and converted the third for 6-2.

Djokovic came back twice from a break down in the third set and eventually broke Monfils in the tenth game using second match point for 6-4.

“It was an unbelievable emotion, under the circumstances with the huge pressure, I played an amazing match,” said Novak after the match. “Everything was working for me today. This next match is maybe the most important match in all our careers, so we hope we can win.”

Viktor Troicki thrilled 15000 fans in Belgrade Arena when he clinched the third point for Serbia for 3-2 win over France and the Davis Cup title for Serbia for the first time in its history!

“This was the greatest experience in my life,” said Troicki. “I still don’t believe it. I mean, probably tomorrow or in the next few days I will start feeling the emotions of winning the Davis Cup.”

“Seriously, I think we all did a great job this year. I would like to thank everyone, the whole team. We truly believed that we could do it, even though we were 2‑1 down. No words can describe my feeling right now.”

The Serbs celebrated by having their heads shaved. Viktor described the victory as “the most unbelievable moment of my life,” while Nole added: “It’s historic. This is our biggest success as individuals, as a team, as a country.” 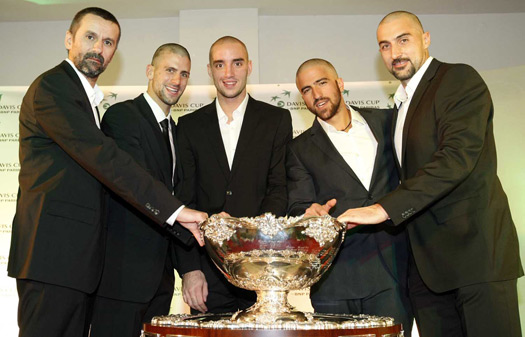