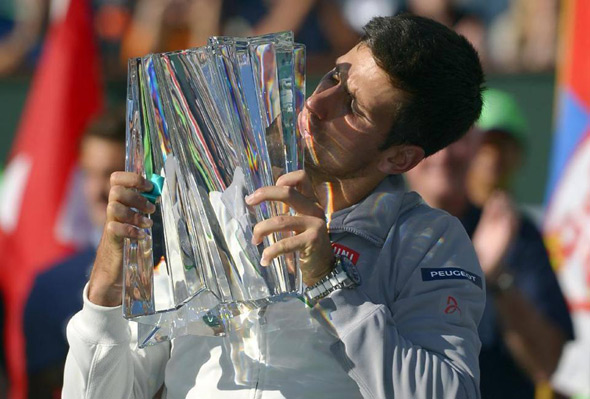 World no.2 Novak Djokovic captured the BNP Paribas Open title for the third time coming back from a set down to beat Roger Federer 3-6, 6-3, 7-6 (3) in two hours and 12 minutes on Sunday.

The 26-year-old Serb previously won titles in Indian Wells in 2008 and 2011. He is second, behind Federer, on the all-time tournament leaderboard, joining Jimmy Connors, Michael Chang and Rafael Nadal who also have three crowns.

Roger and Novak split the first two sets. The second seed had a break advantage in the third, and was serving for the win at 5-4, but the Swiss broke back and forced a tie-breaker. Djokovic dominated from the beginning. He sealed it 7-3 to capture his first title in 2014.

“It was a proud achievement. It was not just winning the trophy but the way I came back from a set down in a couple of matches. That gives me a lot of confidence,” Novak said on his performance in Indian Wells.

Novak has now won 17 ATP World Tour Masters 1000 titles (17-10 in finals), and is tied with Andre Agassi at third place on the leaders list.