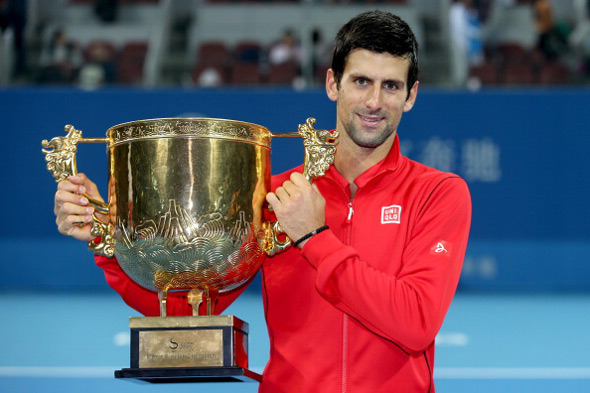 Defending champion Novak Djokovic won a record fourth China Open title with a 6-3, 6-4 victory over no.2 seed Rafael Nadal on Sunday at the ATP World Tour 500 hard-court tournament in Beijing.

The 26-year-old Serbian star provided an impressive performance in the final to clinch his 38th career trophy and fourth in 2013 (Australian Open, Dubai, Monte Carlo).

Djokovic was at his best, landing 91% of his first serve points, not facing a single break point during the match. He made a break in each set to remain unbeaten in Beijing (19-0).

After 1 hour and 27 minutes of high-quality action, Nole closed out his 16th win over Rafa.

“It’s been an incredible week again for me at the China Open,” said Novak. “I still haven’t lost a match here. I just love the conditions. I love the court and the atmosphere that goes around the tournament. Centre court is exceptional, and I enjoy it. I try to cherish every moment that I spend here every year.”

Novak will be surpassed in the Rankings by Nadal on October 7, but with this title he remains competitive with the Manacor native for the remainder of the season.

Djokovic will play at the Shanghai Rolex Masters next week. As a defending champion and top seed, he’ll open quest for his 15th Masters title in the second round against either world no.23 Janko Tipsarevic of Serbia (5-2) or no.37-ranked Spaniard Marcel Granollers (2-0).