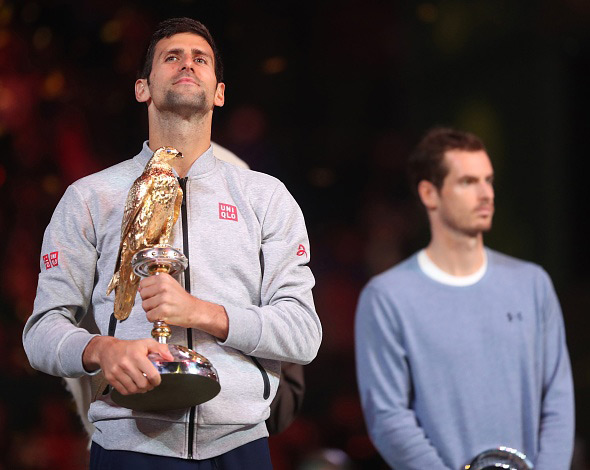 No.2 seed Novak Djokovic successfully defended his Qatar ExxonMobil Open crown with a 6-3, 5-7, 6-4 victory over Andy Murray in Doha.

As soon as the draw came out for the first ATP World Tour tournament in 2017, the tennis world was hoping for a final between the two best players in the world.

Nole and Andy engaged in battle for the 36th time in their careers. The Serb has dominated their rivalry with a commanding 25-11 lead in their overall meetings, and he also leads 20-8 on hard courts. It was the 19th time that the duo met in finals with Nole now leading 11-8.

Novak’s giant serve saved a break point he faced in the third game of the match. The 29-year-old Serb broke the top-seeded Scot to go 5-3 up and then closed the opening set with a fiery cross court shot.

Djokovic also went up a break in the second set when Murray double-faulted on a break point in the seventh game. The defending champion earned three match points in the 10th game, but failed to convert any of them. The Dunblane native survived scare and broke twice to level the match and force the third set.

Novak recovered his composure in the decider and looked more focused. He broke to love in the seventh game and served it out three games later for his first title in 2017 and 67th career trophy. The match lasted two hours and 54 minutes.

“Definitely one of the best ways to start a year. When he turned it around, I thought I hope this is not payback time for yesterday,” Djokovic said. “All the way, to the last shot, you never know with Andy. It’s no strange occurrence for both of us to play three sets for three hours. It’s a very physical battle. We’re both going to need a little time to recover. To win here, against the biggest rival, is a dream start.”

The win against Andy in the Qatar Open final will give Novak confidence heading into the Australian Open, the year’s first Grand Slam, which starts on January 16.

Last year, Djokovic re-established himself as the king of Melbourne when he claimed a sixth Australian Open title in an astonishing final. The Serbian star beat Andy Murray 6-1, 7-5, 7-6 and became the most successful player in Melbourne alongside Roy Emerson.

We wish a very Merry Christmas to all of you around the world who celebrate it in accordance with the old Julian calendar.