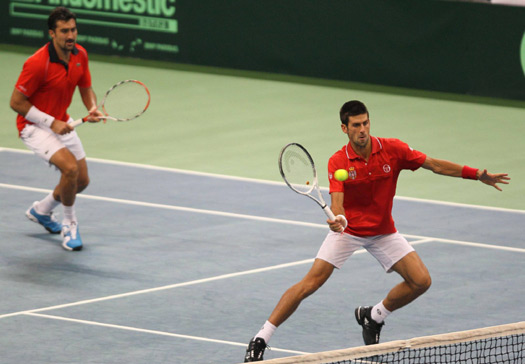 18. 09. 2010. · Serbia needs both wins over Czech Republic on Sunday to reach the World Group finals for the first time.

World no.2 Novak Djokovic and doubles world no.3 Nenad Zimonjic lost to Czech duo Tomas Berdych and Radek Stepanek in 4 sets 6-3, 1-6, 4-6, 1-6 in 2 hours and 38 minutes on Saturday to go down 1-2 in the Davis Cup by BNP Paribas World Group semi-final tie that is being played on an indoor hard court in Belgrade Arena.

Serbian no.1 Novak Djokovic has the opportunity to clinch the second point for Serbia, as he plays against world no.7 Tomas Berdych on Sunday at 14:00 CET. Nole leads Berdych 2-1 in previous meetings.