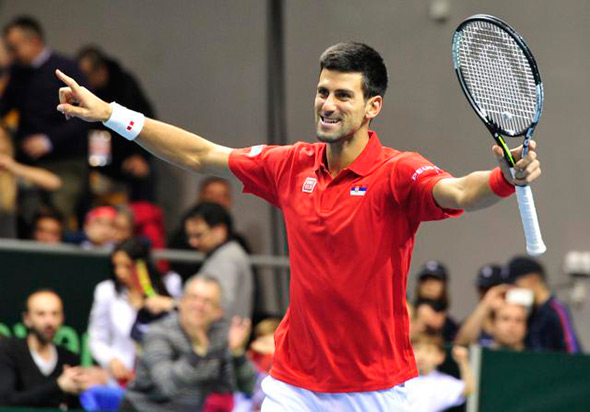 Novak and Viktor Troicki both won on the opening day at Aleksandar Nikolic Arena to give Serbia a 2-0 lead over Spain going into Saturday’s doubles.

The world no.2 beat 24th-ranked Albert Ramos-Vinolas in straight sets to put hosts Serbia ahead in the Davis Cup by BNP Paribas World Group quarter-final tie on Friday.

The 29-year-old Belgrade native broke once in the first two sets and twice in the third, having saved the only break point he faced during the one hour, 55-minute encounter.

“I was especially happy with my serve. It was working very well today, I won a lot of points off my first serve. At this level that’s important,” Novak said. “All in all, I’m very pleased. I’m very glad to play for my country and get the opening point.”

In the second match of the day, Viktor Troicki defeated Pablo Carreno Busta 6-4, 6-3, 6-4 to back up Nole’s victory.

The Saturday doubles is scheduled at 16:00 CET. If Nenad Zimonjic and Viktor Troicki win the third point against Marc Lopez and Pablo Carreno Busta, Serbia will reach semi-finals for the first time since 2013.

The winners will play France or Great Britain on September 15-17.