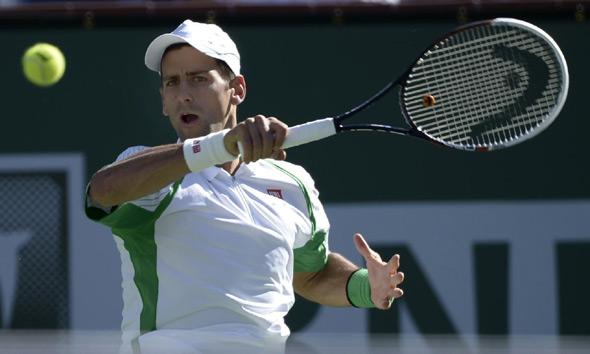 The Argentine ended Novak’s desert run battling through a marathon encounter in two hours and 50 minutes, recording his third win in their 11 meetings.

Djokovic broke Del Potro in the 10th game of the match to take the opening set 6-4 in 53 minutes.

With the temperature in the Californian desert around 35C, both players appeared to be feeling the effects of the heat. In a set with five service breaks, the Argentine got the first. Though Novak immediately broke back, he was again broken in the third game, and also failed to hold in the seventh when Del Potro hit a forehand winner down the line to go 5-2 up. Nole prevented his opponent from serving out the set at first attempt, but the 2009 US Open champion eventually won it 6-4 in 54 minutes.

Novak opened a 3-0 lead in the deciding third set before Del Potro dug in to get back on serve. It was the 24-year-old Argentine who emerged with the mental edge in the end. He broke once again in the ninth game and served out the match with an ace to seal his place in the final, ending Novak’s 22-match winning streak.

“I didn’t deserve to win today,” Novak said after falling short in his bid to reach the final. “Whenever I had chances, in the second and third sets, I threw them away with some unforced errors. All the credit to my opponent. He deserved to win because he was more composed in the important moments and he played the right shots. He stepped into the court, where, on the other side, I was at back of the court too passive. My movement was poor. Today I just wasn’t there. It happens. It’s sport, and I just didn’t make it this time.”

Novak was contesting his fifth semi-final at the Indian Wells Tennis Garden in his eighth main draw appearance. He lost his first match since falling to Sam Querrey in the second round of the Paris Masters last October.

The 25-year-old Belgrade native will head to Miami for the second ATP World Tour Masters 1000 event of the season that begins on Wednesday, while Del Potro faces world number five Rafael Nadal in Sunday’s final.

Last year, the Serbian defeated Andy Murray 6-1, 7-6(4) to triumph for the third time at Crandon Park.