Djokovic out of this world, says Berlocq 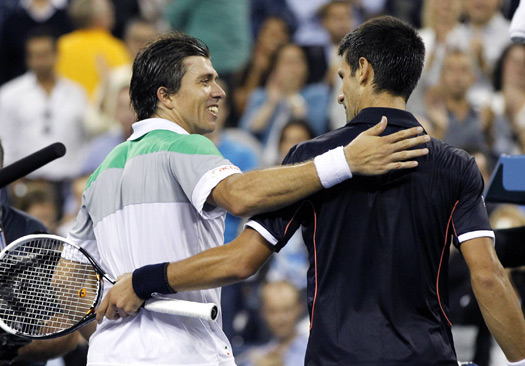 Novak’s 6-0, 6-0, 6-2 win over Carlos Berlocq left the Argentinian feeling like the victim of an alien invasion at the US Open on Thursday.

“This guy is from another planet,” said the 74th-ranked Berlocq, who simply had no answer for the all-conquering Serbian who has now won 59 matches this season.

The second round match lasted only 90 minutes. When Berlocq finally managed to win a game, he got a standing ovation from the Arthur Ashe Stadium crowd.

“One of the guys, on the way out, said, ‘Listen, I paid 100 bucks and you’re only staying for an hour and a half on the court. … Give me a racket or something,’ ” said Nole who will meet Nikolay Davydenko in the third round.

“He definitely cannot be underestimated,” assessed Novak. “If he’s on a roll and feeling the ball well, he can be very dangerous because he plays very fast. But if I continue playing this way I’m confident that I have a good chance.”

Nole is looking to win the US Open title for the first time after losing twice before in the final at Flushing Meadows. He finished runner-up to Roger Federer in 2007 and fell to Nadal last year.

The world’s best player has lost only two matches in 2011, capturing nine titles in the first eight months.