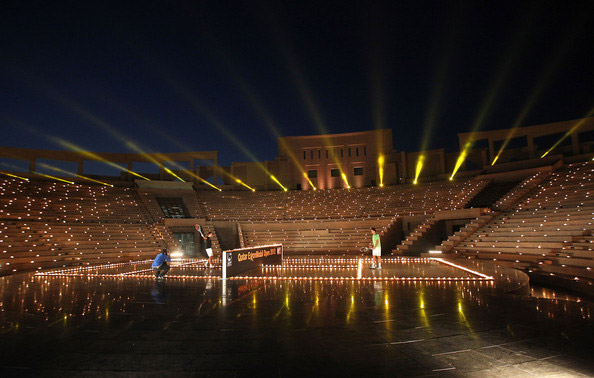 World no.1 and seven-time Grand Slam champion Novak Djokovic will make his debut at the Qatar ExxonMobil Open, the first tournament on the 2015 ATP calendar.

The ATP World Tour 250 event, which has attracted four of the top 10 players in the world, will take place at the Khalifa International Tennis and Squash Complex from January 5-10.

Novak is no.1 seed and will open his campaign against fellow Serb Dusan Lajovic, ranked no.69. It will be their first career encounter.

You can see the full draw here.

“It’s great to have Novak Djokovic the world no.1 here for the first time. I’m sure he’ll bring out lots of Serbian fans. It’s a great draw for the first week of the year; it’s a very important week in the calendar to go to Australia,“ said the Doha Tournament Director Karim Alami.

The Serbian pairing of Novak and Filip Krajinovic beat Jabor Mohammed Ali Mutawa (QAT) and Malek Jaziri (TUN) 6-1, 6-4 in the first round of the doubles competition on Monday.

They will take on no.3 seeds Juan Sebastian Cabal and Robert Farah of Columbia in the quarter-finals.