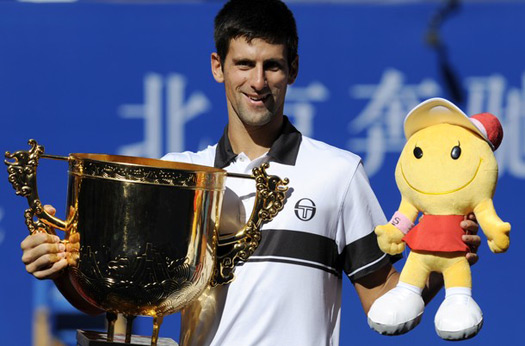 World no.2 Novak Djokovic won his second straight China Open trophy and defended a title for the second time in his career! He defeated no.8 seed Spaniard David Ferrer 6-2, 6-4 in 1 hour and 23 minutes.

Djokovic was leading 3-1 on Sunday in rain suspended final. The match was postponed until 6am CET on Monday.

Novak made a break already in the second game and then held to consolidate the break. At 3-1 the rain interrupted the match, and it had to be postponed until the following day.

Djokovic continued the match well. He broke Ferrer in the eighth game to claim the opening set 6-2 in 31 minutes.

The 23-year-old Belgrade native found himself 0-30 behind on serve in the fifth game of the second set and handed the break to the Spaniard with his first double fault. Nole broke back in the eighth game and then held to go 5-4 in front. Ferrer was serving to stay in the match when Djokovic broke his serve once again to win the set and match 6-4.

“I started off really well, but then I lost the momentum,” admitted Novak. “I kind of lost the rhythm, got him back into the match with some unforced errors, and it wasn’t a really nice looking match from both sides.”

This is Nole’s eighteenth career title. He’s become the first back-to-back winner at this tournament (since it began in 2004).

“This is definitely a confidence boost for me. In the last two or three months, I’ve been feeling much more comfortable and confident on the court, playing an aggressive game, and my serve is working for me,” said the China Open champion.

“I’m just happy to win another tournament and make my record here in Beijing even better. It’s definitely one of the most successful tournaments in my career.”

Djokovic will be heading to Shanghai where he’ll play at the Shanghai Rolex Masters. Nole is no.2 seed and has a BYE in the first round. He will begin his quest for his sixth Masters title in the second round against either world no.17 Croat Ivan Ljubicic or Chinese wild card Ze Zhang. The match is set for Wednesday.