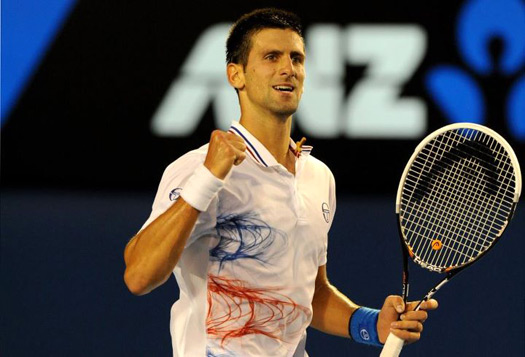 Nole is through to his third Australian Open semi-final!

As expected, Nole and David played a tough and thrilling match with long rallies and beautiful points.

Ferrer saved three break points in both first and third games of the clash, but Novak finally managed to break him in the fifth and then held to consolidate the break for 4-2 lead. The Serbian top seed needed to save a break point before converting his second set point for 6-4 in 58 minutes.

Both players worked hard to win their points in the second set. Nole made a break in the opening game, but the Spaniard fought back in the fourth to level at 2-2. The 24-year-old Belgrade native faced scare in the sixth game but held serve to hang in there. Those six games lasted 41 minutes. Novak had a great opportunity to win the set when he broke Ferrer in the eleventh game, but the fifth seed showed once again what a great fighter he is. He broke back and the set went into a tiebreaker.

Ferrer was 4-2 up, but Nole came back with two mini-breaks for 5-4 lead and with two great points on his serve closed the set 7-4.

The defending champion started great in the third set. He broke his opponent’s serve in the second game and held for 3-0 lead. From that point Novak was unstoppable. He took the set 6-1 in just 30 minutes sealing it with an ace to advance into his seventh consecutive Grand Slam semi-final.

“You could expect before coming into this match that it was going to be very physical,” said Novak. “David makes you run, makes you play an extra shot, makes you earn your points. I think I was hitting the ball really well from the baseline. He had his times in the match where he was playing really well. I think my serve could have been a little bit better. But, overall, it was a great performance.”

The world no.1 has set up a final four clash with no.4 seed and two-time former runner-up Andy Murray who defeated Kei Nishikori of Japan.

In the first semi-final match on Thursday, no.2 Rafael Nadal will take on no.3 Roger Federer.