Impressive Nole storms into fourth round of Indian Wells in just 54 minutes! 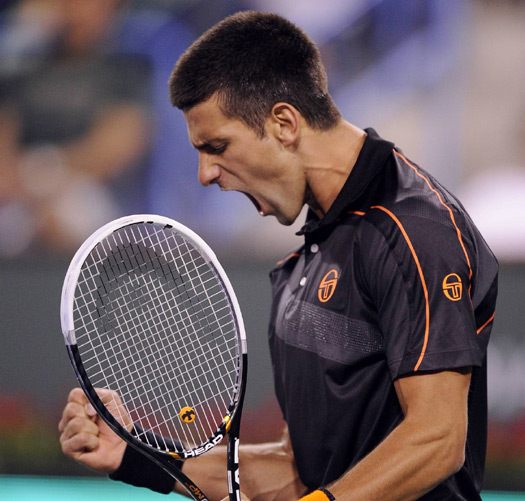 Third seed Novak Djokovic needed just 54 minutes to crush world no.34 Latvian Ernests Gulbis 6-0, 6-1 for a place in the fourth round at the BNP Paribas Open (ATP World Tour Masters 1000 event) on Tuesday.

The 2008 Indian Wells champion was very confident, while Gulbis was making many unforced errors, letting the Serb cruise through the sets. The 23-year-old won the first set 6-0, breaking his opponent’s serve three times, in second, fourth and sixth games.

Nole continued dominating in the second set. He made two more breaks and closed the match 6-1.

“He’s unpredictable; he has a very strong serve and he has a powerful groundstroke, but if he’s not patient and not hitting the right balls like today, he can miss a lot”,said Novak. “That’s what happened. I was just trying to keep the ball in the court, not doing too much, just returning a lot and making him play an extra shot and changing the pace. He was not feeling comfortable, obviously.”

Djokovic served 4 aces.
He hit 10 winners to Gulbis’s 1, and made 13 unforced errors, 15 less than his opponent.
The Serb converted 5 of his 6 chances for break, and saved all of 5 break points he faced.

Nole will next face his friend and compatriot world no.18 Viktor Troicki who defeated Frenchman Michael Llodra 6-3, 6-3.

Djokovic has improved to a 14-0 season record. He is undefeated in his past 16 matches dating back to last December’s Davis Cup final.

“I cannot ask for a better start of the year,” said Novak. “I’m just building up on that confidence and continuing to play well, and feeling up from that run that I had in the Davis Cup final. I have been playing great tennis, the best tennis of my life. I’m just trying to play better and better each match, and then maintain a very consistent level of performance.”