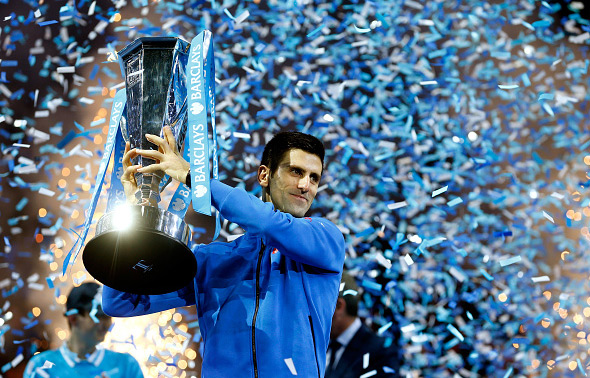 Djokovic beat the Swiss for a career-high 11th title of the year, and 59th singles trophy overall. The Serbian star ends the remarkable season with an 82-6 match record.

With this win, Nole tied his ATP head-to-head series with Federer to 22 wins apiece. The showdown was his 15th consecutive final of the year, which is an Open Era record.

Novak earned the first break of the opening set to go 2-1 ahead and then consolidated it for 3-1 lead. He broke for the second time in the ninth game taking a one-set advantage after 39 minutes of play. The top seed applied pressure again in the 10th game of the second set. The Swiss had saved one match point before double-faulting on the second.

The 28-year-old Belgrade native won 84% of second serve points and saved both break points he faced during the one hour, 20-minute clash.

“I’m very proud to have these achievements with my team,” said Novak during the trophy ceremony. “Without their support and my family, I wouldn’t be where I am. It’s been a long season, but the best of my life. I am enjoying every moment on the court, I cherish every moment after dreaming of it as a kid. Thank you everyone for making this year so special. Congratulations to Roger, it was another epic match.”

En-route to the final, Nole beat Kei Nishikori, Tomas Berdych and Rafael Nadal. He also won the title at the prestigious season-ending tournament in 2008 (d. Davydenko), 2012 (d. Federer), 2013 (d. Nadal) and 2014 (Federer withdrew ahead of final due to a back injury).

The victory put Novak into a second place tie with Ivan Lendl and and Pete Sampras with five Tour Finals wins, one behind Federer.

Novak has clinched the year-end no.1 ATP Ranking for a fourth time. He previously finished at the top in 2011, 2012 and 2014, and is the sixth player to finish year-end no.1 on four or more occasions, following in the footsteps of Pete Sampras (6), Jimmy Connors and Roger Federer (5), Ivan Lendl and John McEnroe (4).

Right after the final, Nole shared some thoughts on what has been an amazing year in live chat with fans on his Facebook Page. He thanked his fans on a tremendous support and answered a couple of questions. Enjoy the video!