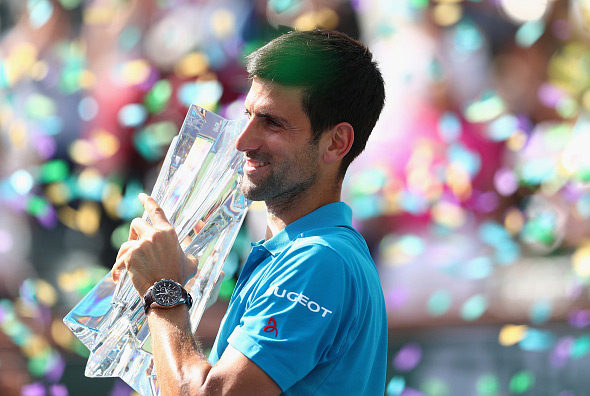 World no.1 and top seed Novak Djokovic looked at his imperious best in the Indian Wells final against 12th seed Milos Raonic on Sunday afternoon.

The Serbian tennis star dominated from start to finish in a flawless 77-minute 6-2, 6-0 victory, extending his perfect ATP H2H mark against the Canadian to 6-0.

Novak broke twice in the first set and three times in the second, having denied his opponent a single break point opportunity. He was 9/10 on net approaches.

Watch: The moment @DjokerNole got his hands on his 27th Masters trophy, equaling Rafa Nadal’s tally at that level. https://t.co/HoKMzBcYfB

“It has been a great couple of weeks,” said Nole. “To win this tournament five times is a fantastic achievement for my team and I. We don’t take anything for granted, especially because this tournament has been, for many, many players, a favorite tournament. All the top players each year competing and trying to win it. Players are very welcome. The spectators are sharing their passion and love for the sport with us, and in this kind of environment you are obviously inspired to play your best.”

The singles draw ceremony takes place on Monday at 17:00 CET.