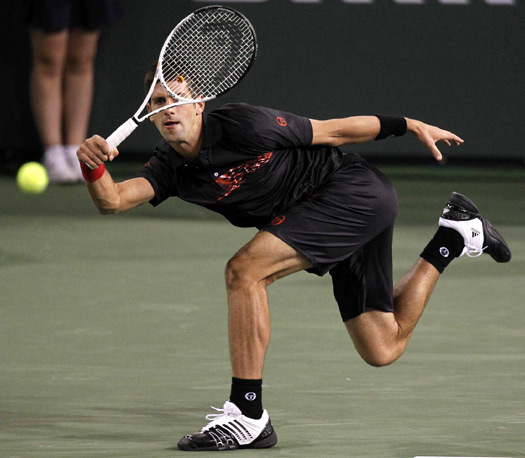 Croat Ivan Ljubicic stunned world no.2 in the fourth round of the BNP Paribas Open in Indian Wells. Djokovic lost 5-7, 3-6 in 1 hour and 44 minutes.

Novak made a break in the third game and then held for 3-1 lead. The 22-year-old Serb had three game points in the marathon eighth game, but it was Ljubicic who capitalised on his chance and broke Djokovic’s service to level the result. Nole failed to convert three break points in the ninth game, while the Croat used his break/set point in the 12th to take the first set 7-5.

Ljubicic made a crucial break in the sixth game of the second set and then held to increase his lead to 5-2. Novak had a chance to break back in the ninth game, but Ivan saved it with a fantastic service and sealed a win on a second match point.

”This is a tournament where I definitely didn’t feel comfortable on the court”, said Djokovic after the match. “It’s not because of the tournament itself. It’s just because I had a very tiring couple of weeks coming from Davis Cup, which was emotionally very exhausting for me. I am not happy with the overall performance that I had in this tournament, because I know I could have played better and could have done better. But under decent circumstances I still made it to the fourth round, which is quite okay.”