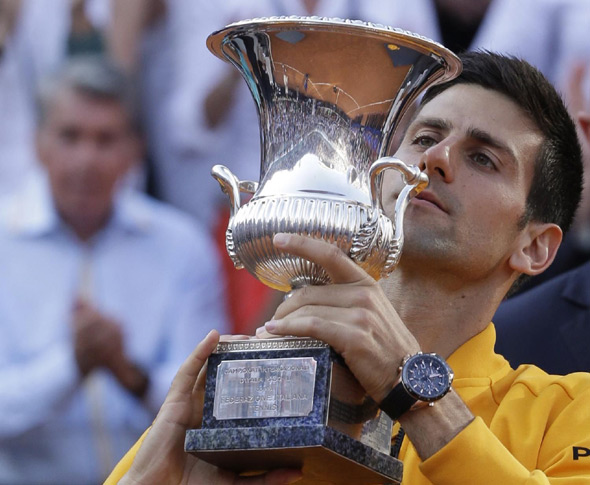 Veni, vidi, vici. Novak continued his domination of men’s tennis with a straight-sets win over Roger Federer in the Italian Open final!

It was the 39th meeting in their storied rivalry, Novak pulled the pair’s H2H series to 19-20.

The 27-year-old Djokovic has now amassed 24 ATP World Tour Masters 1000 shields – second only to Rafael Nadal, who holds the record with 27 titles won.

Novak broke as Federer served to stay in the first set and never looked back after that point.

Full of confidence, the top-seeded Serbian star broke the Swiss early in the second set and went on to seal his fourth crown at the Foro Italico in 75 minutes.

“I was able to find my way through,” said Novak. “Roger put a lot of pressure on my service game at 4-4, but I managed to respond well, move him around the court, and then I played a couple of great points that gave me the set. When you’re a set up, the momentum is shifting to your side… This one was special. To perform the way I did in front of my parents and all of you means so much. I especially want to thank the city, the people of Rome, all the fans for the support and gratitude you showed me all week on and off the court. It was like home away from home. Grazie mille!”

It was Nole’s 22nd consecutive win, fifth title of 2015 and 53rd of his career. He is now 35-2 on the season, which includes titles in Melbourne, Indian Wells, Miami and Monte-Carlo.

“It gives me a great deal of satisfaction that I won these tournaments. I don’t think that I need to gear up or do anything special in order to be successful at Roland Garros. I was very close to that title before, played several finals, I just need to continue preparing myself for that event as I prepare for any other, try to keep the routine going and hope it will take me where I want to be.”