Nole advances to second round of Australian Open! 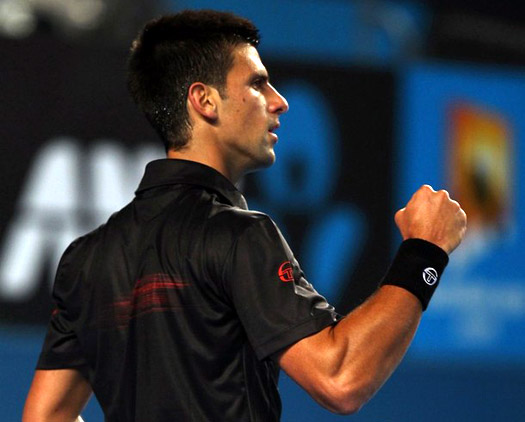 Australian Open 2008 champion Novak Djokovic has breezed through to the second round of the tournament after downing Spain’s Daniel Gimeno-Traver in straight sets, 7-5, 6-3, 6-2 in 2 hours on Tuesday in Melbourne.

The Serb looked in good form on Hisense Arena.

Novak found himself 0-40 down in the third game of the first set. He managed to save the first two break points, one with a forehand winner and the other when Traver hit long, but the Spaniard got it at the third attempt when Djokovic hit into the net. Novak had a chance to break back already in the next game, but Traver held. Djokovic fought back in the eighth game to level the score. The Serb faced two break points in the eleventh game, but held, made another break and served it out for 7-5.

The 22-year-old Djokovic dominated the world no.73 in the rest of the match. He raced through his opening service game of the second set. One break was enough for him to take it 6-3.

Nole broke his opponent’s service twice in the third set, in the fifth and seventh game for 5-2 lead. He went 0-30 down serving for the match, but hit back with four successive points to close the match 6-2.

Djokovic served 4 aces to Gimeno-Traver’s 5. Both players had 5 double faults.

Novak recorded 23 winners to his opponent’s 24.

The Serb made 28 unforced errors to the Spaniard’s 47.

Djokovic converted 5 of his 14 break points, while Gimeno-Traver capitalised on 1 of his 6 chances for break.

“It’s the first match of the year so it was a little bit slower start, but I think that I had across the net an opponent who played exceptionally well today”, said Djokovic after the match.

”Conditions were a little bit strange, because it was really slow. It was hard to make a winner. He’s a very fast player. He was going for the shots and didn’t have anything to lose. He had a very high percentage of the first serves. I was struggling in the first set. That’s no secret. In the end I picked it up, and I was really happy overall with how I handled things.”