Nole battles past Wawrinka into fifth US Open final! 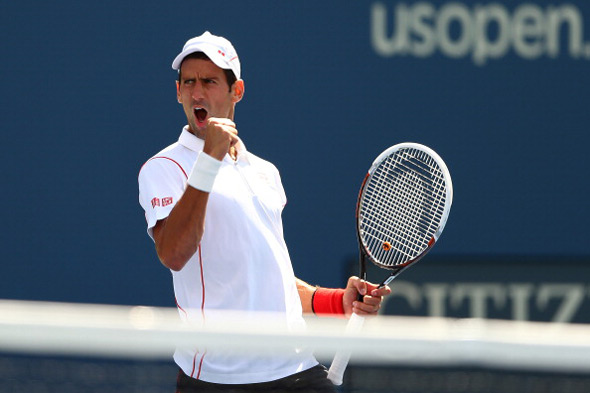 Nole is through to his fourth straight US Open final and fifth overall!

Novak suffered three service breaks in the first set, while breaking back once, to fall behind 2-6 in 34 minutes.

Djokovic was a break down in the second set, but fought back to 4-all and forced a tiebreaker. He won it 7-4 with a blistering cross court forehand return winner.

A couple of errors from Novak in the eighth game of the third set handed Wawrinka three break points. The Swiss took his chance and sealed it 6-3.

The Serbian world no.1 broke his opponent in the second game of the fourth set and kept the advantage to win it 6-3 and level the match.

After failing to capitalise on five break point opportunities in a 21-minute ‘edge of the seat’ third game, Nole finally broke Stan in the fifth game of the deciding set and held to increase his lead to 4-2. He served out the match four games later to clinch his 50th win in 2013.

“These matches is what we live for, what we practice for,” Djokovic said in an on-court interview. “I think it was obvious Stan played more aggressive; he played better tennis over all. I was just trying to hang in there, trying to adjust. It was not an easy match for both of us. I had to run a lot, find my rhythm in this wind. I wasn’t playing as well as I wanted to, but all the credit to him for playing so aggressive and playing so well. I’m just so fortunate to be able to play my best tennis when I needed to.”

The Spaniard ousted Richard Gasquet in straight sets in the second semi-final of the day.

Djokovic will remain world no.1 after the US Open. It will be his 98th week on top.