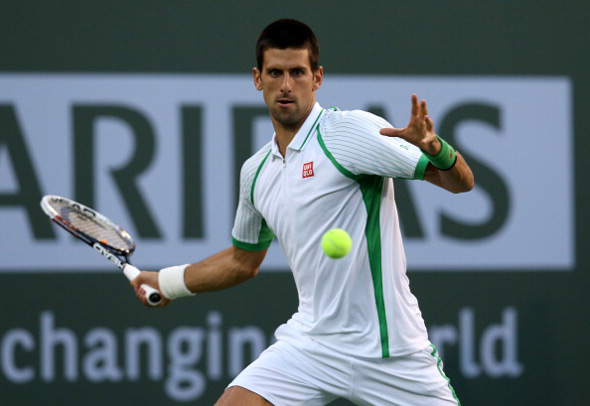 2008 and 2011 Indian Wells champion Novak Djokovic overcame a slow start to beat no.31 seed Grigor Dimitrov of Bulgaria 7-6 (4), 6-1 on Tuesday and advance into the fourth round of the BNP Paribas Open.

Dimitrov delivered four double faults while serving for the set. Nole converted his second break point and held serve in emphatic fashion to level the result to 5-5. The 25-year-old Belgrade native took the set 7-4 on the tie-break in 45 minutes.

Djokovic made a double break in the second set, capitalising on his chances in the second and sixth games, and served it out 6-1.

“I tried to hang in there and stay in the match,” Novak said courtside. “I started very bad, very poor. He served very well but he made four double faults at 5-3 and got me back into the match. He made a lot of unforced errors and I just had to get the ball back in the court.”

The Serb broke his opponent three times from five opportunities and won 78 per cent of points behind his first serve, improving his career record against the Bulgarian to 2-0.

Djokovic will face no.23 seed Sam Querrey on Wednesday about 20.30 local time (Thursday 04.30 CET) for a place in the quarter-finals. The American eliminated Australia’s Marinko Matosevic 7-6, 6-7, 7-5 in two hours and 46 minutes.

“It will be very interesting. He won our last encounter in Paris indoors a few months ago. I played a few tournaments since then. Now we have different circumstances and conditions. We’ll play in front of his crowd. He has a big serve and big game. I will need to definitely start better than I have done today, and try to step into the court a little bit more,” the world no.1 said about the upcoming challenge.