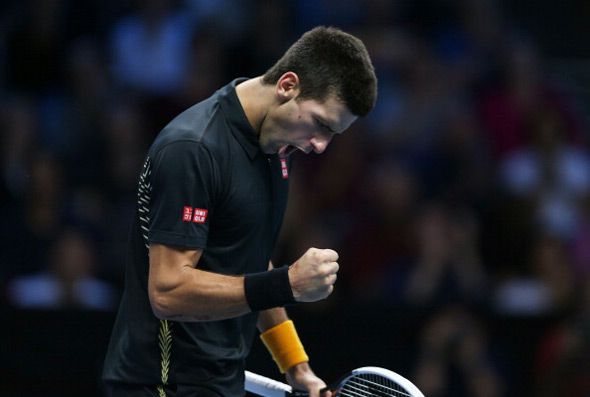 World no.1 and 2008 champion Novak Djokovic qualified for the Barclays ATP World Tour Finals semis with a 6-2, 7-6 (6) victory over no.6 seed Tomas Berdych in 1 hour and 37 minutes in his final Group A round robin match at the O2 Arena on Friday.

Novak powered through the opening set, losing just five points on serve. He broke Berdych twice for 6-2 in 34 minutes.

Players exchanged breaks in the second set which was decided in a tie-breaker. Nole came back from 1-5 down, and fended off three set points before earning and converting his first match point opportunity.

“I was trying not to think about all the qualification scenarios, just focused on trying to win the game,” Djokovic said. “It’s the first time I’ve won all three group matches which is a great confidence boost for semi-finals.”

Nole tops Group A with a 3-0 record. No.3 seed Andy Murray is also through to semis.

Djokovic has earned 600 ATP points so far. Semi-final win brings 400 points, and win in the finals is worth 500 additional points. Undefeated champion can earn 1500 points in total.

The top-seeded Belgrade native now has a day off before Sunday’s semi-final. He will play runner-up in Group B, no.6 seed Juan Martin Del Potro. Novak leads their career H2H record 6-2.