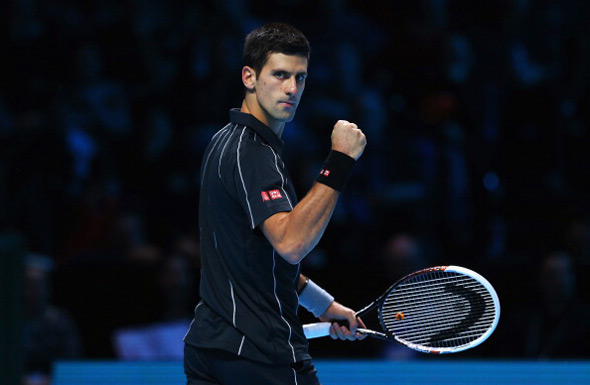 The match lasted one hour and 54 minutes.

Novak, the 2008 and 2012 champion at the season finale, improved to a 2-0 record in Group B. The win extended his Head2Head record against the Argentine to 11-3.

Nole broke Del Potro in the sixth game and took the opening set 6-3 in 40 minutes. The second and third sets were also decided with a break in the sixth game. The 26-year-old Serb put in a solid performance to record victory and extend his winning run to 19 matches.

“I had opportunities in that game at 3-2, and used it,” said Novak. “I just tried to make him play. I served very well towards the end of the match. He has one of the biggest serves in the sport. He has one of the most aggressive forehands. I just needed to stay tough. I did qualify for the semi-finals, which is definitely positive news, but I still want to try to win the last match of the group.”

The Belgrade native landed 78% of his first service point and was 15/18 on net approaches.

Djokovic now has a 69-9 record on the season, which includes six titles in eight finals.

The Serbian no.1, who will lead his team against the Czech Republic in the Davis Cup final (November 15-17), takes a 9-1 career mark to his third round-robin match on Saturday when he faces no.8 seed Richard Gasquet (21.00 CET).

Roger Federer and Juan Martin del Potro will play eachother for the second semi-final place in Group B.

Novak tops the Group and will face Stanislas Wawrinka on Sunday, who finished second in Group A, behind top-seeded Rafael Nadal.