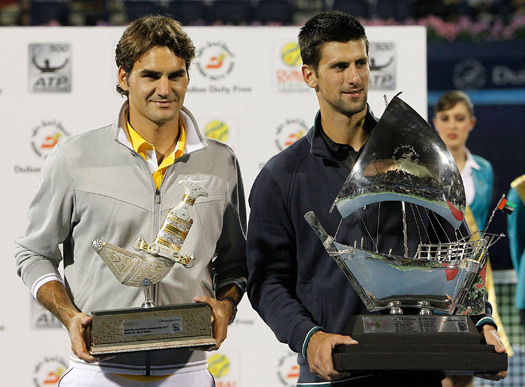 This is Nole’s twentieth career title and second in 2011.

Federer sent a forehand long to hand Novak a break point in the third game, and followed it up with another missed forehand to give the Serb an early break. Djokovic broke Federer’s serve once again in the ninth game to take the first set 6-3.

Novak was broken in the third game of the second set, but he quickly regained momentum and broke back in the sixth game to level the result to 3-3. The best Serbian tennis player finished the match as he began, with a towering confidence. The 23-year-old Belgrade native converted his third break point opportunity in the eighth game and then closed the set and match 6-3.

“I guess I rose to the occasion,” said Novak. “I was aware of the challenge that is expecting me on the court, and I was aware of the fact that I need to be on top of my game in order to beat Roger. I was serving really well, especially the first set, holding my serve except that one game when I got broken, confidently through throughout the whole match. Just the perfect performance overall.”

Djokovic’s first serve win percentage was 82, compared to 63 for Federer.

Nole capitalised on 4 of his 10 chances for break, while the Swiss converted only 1 of his 2 break points.

“I have this feeling in my head, and it’s really important to know for me that I can perform this well,” added Nole. “This match has probably been one of the best that I played this year. I want to keep it up, definitely. I feel physically well, fit, mentally motivated to do even more coming up to Indian Wells and Miami where I haven’t done well in the last years.”

“Any time I win against Roger it’s a great success because he’s such a great player. We all know how mentally strong of a player he is. To be able to win against Roger in straight sets as I did tonight is incredible, but I want to keep on going. I know that I have qualities to do even more, and that’s what I want.”

Since reaching the semi-finals at the Barclays ATP World Tour Finals in London in November, Novak has gone on a career-best 14-match winning streak. He led Serbia to victory in the Davis Cup final in December against France before opening the 2011 season by winning his second Grand Slam – Australian Open.

Djokovic will be heading to Novi Sad where he’ll join Serbia’s Davis Cup team. The Davis Cup by BNP Paribas World Group first round tie against India will take place on 4-6 March 2011.