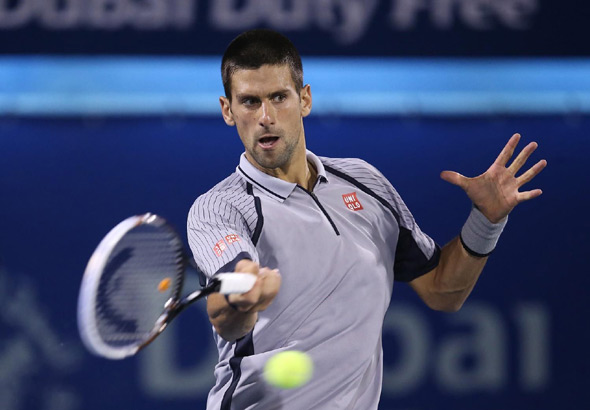 World no.1 and three-time Dubai Duty Free Tennis Championships winner, Novak Djokovic, advanced to the second round of the ATP World Tour 500 tournament with a 6-1, 6-4 win over his friend and compatriot Viktor Troicki (44).

Nole cruised through his opening match in 67 minutes.

The Australian Open reigning champion needed just 21 minutes to race through the first set, breaking Troicki in the second and sixth games for convincing 6-1.

The 25-year-old Serbian star made a break in the third game of the second set and consolidated it for 3-1 lead. Troicki broke back in the eighth game to level at 4-all, but Novak broke once again and served out the set and match converting his second match point.

“That was a good way to start, especially in the first set, considering the fact I haven’t played an official tournament for three, four weeks,” Novak said. “I wanted to be extra focused on the court today, because I also knew he has a big serve, as he had proven tonight, and can be very dangerous on these courts. This is one of the fastest hard courts on the tour that I have experienced outdoors. It’s never easy when you’re playing somebody that you know for such a long time – he’s a close friend on and off the court, but when you’re playing a match, there is no doubt that we both want to win.”

Djokovic will face world no.55 Roberto Bautista Agut in the second round, on Wednesday about 21.00 local time (18.00 CET). The Spaniard beat Belgian youngster David Goffin 6-2, 7-5.

Novak and Agut have never met before.