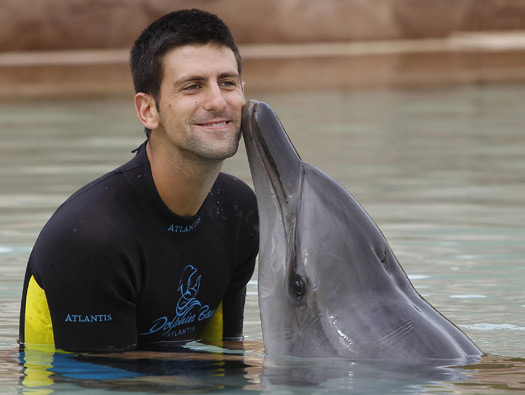 Two breaks in the first and a break in the second set were enough for Nole to defeat the Frenchman for the second time in their three meetings.

“I’m happy with the performance today,” said Djokovic. “I think he didn’t serve as well and as fast as our last match in Paris a couple of months back. But still, I was managing to return a lot of balls back and making him play an extra shot. I think I made a lot of returns in. That’s what made I think the difference.”

The Serb converted 3 of his 4 break point opportunities, while the Frenchman didn’t use any of his 3 chances for break.

The world no.3 will next play against Spaniard Feliciano Lopez who beat Tawainese Yen-Hsun Lu by retirement (5-0 for Lopez in the opening set).

Nole won both their previous encounters, back in 2007.

Their second round match is scheduled on Wednesday.

The duo of brothers, Novak and Marko Djokovic, lost to no.1 seeds Leander Paes and Mahesh Bhupathi of India in the opening round of doubles competition 4-6, 1-6.

“Obviously (it was) a tricky match playing Novak and his brother,” said Bhupathi.

Paes added: “Novak is a real champion, and it’s nice see him support his own brother play at the professional level. I think that makes it very special.”

Earlier in the day, following his singles victory, Nole said he was eager to help his brother get a taste for playing at the highest level, while also working on his own serve and volley game. “Indian Wells I’m playing with Troicki; Miami with Murray. One of the reasons playing doubles is to work on the serve and volley game and return. It’s good. It helps. Hopefully I can have fun with it as well.”

”The main purpose for (Marko) here and in any professional event he plays is to learn. To get as much practice, as much experience as he can, and then use it afterwards. It’s a huge inspiration for him to see the best players in the world, and motivation.”