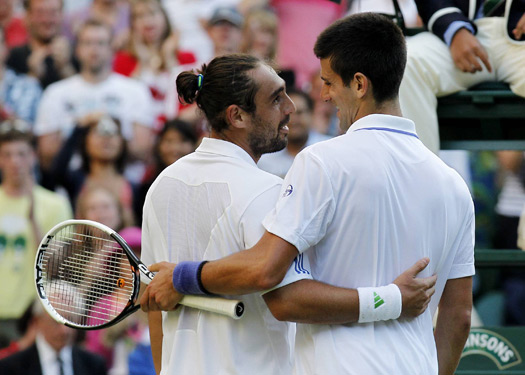 Nole advanced into the fourth round of Wimbledon with a 6-4, 4-6, 6-3, 6-4 victory over world no.30 Cypriot Marcos Baghdatis on Center court on Saturday.

Novak was forced to work hard to beat Marcos to reach the last 16.

Djokovic won the first set in 48 minutes thanks to one break of serve in the ninth game. He soon realised that the 26-year-old Baghdatis was not going to fade away.

Both players squandered chances to break at the start of the second set but it was the world no.2 who self-destructed in the third game, double-faulting to hand the initiative to the 2006 semi-finalist, 4-6.

Baghdatis tried hard to keep the momentum going but he was beginning to tire and in the third set Novak broke to lead 3-1. He never looked like losing that advantage and he served a love game to take that set.

In the fourth set, Nole managed to keep his nerve in the face of real pressure, breaking in the fifth game and he eventually held his serve in a magnificent 10th and final game.

“To pull off a win out of this match is great. I have to be happy with the way I played,” Novak told afterwards. “He plays great on grass, his game is suited to quick surfaces and he has played very well here over years.”

“The atmosphere was fantastic, it was hard to focus, but it was great to be part of such an amazing match.”

The fifth Novak’s career win over Baghdatis is a great way to end the first week of the competition at the All England Club in London.

Second-seeded Nole will face no.19 seed Frenchman Michael Llodra for a place in the quarter-finals.