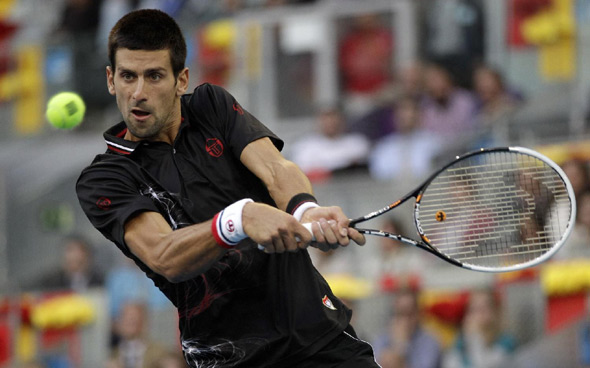 Defending champion Novak Djokovic secured his place in the quarter-finals at the Mutua Madrid Open, defeating Swiss Stanislas Wawrinka 7-6(5), 6-4 in 1 hour and 45 minutes on Thursday.

The top seed raced to a 5-2 lead in the second set with a double break. Wawrinka broke back once, but Nole served out the match two games later.

It was the pair’s first meeting this year and 12th overall, and Novak’s 10th win.

“They are saying it’s exactly the same as the red clay which is not true because there is a big difference,” Novak said in his post match interview. “You are tripping and slipping and sliding all the time and winner will be the one who doesn’t get hurt until the end of the week because a lot of players fell down. Generally it’s a new experience and the way it looks this year hopefully the last experience.”

The 24-year-old Belgrade native, winner of two titles this year including his third Australian Open crown, needed 4 match points to finish off the 21st-ranked Wawrinka and will play his friend and compatriot Janko Tipsarevic (7) for a place in Saturday’s semi-finals.

The quarter-final match is scheduled on Friday at 19.00 CET. Novak leads their H2H 4-1.

2011 runner-up Rafael Nadal is out of contention for the Madrid title. He lost to his fellow Spaniard Fernando Verdasco for the first time in 14 matches.