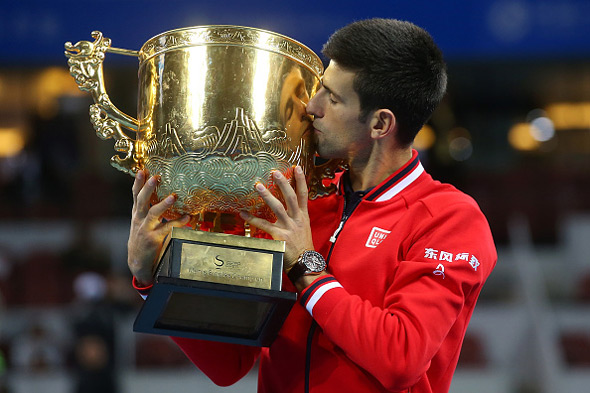 Nole is the 2015 China Open champion!

World no.1 Novak Djokovic captured his eighth ATP World Tour title of the season over no.3 seed Rafael Nadal 6-2, 6-2, in the final of the China Open, an ATP World Tour 500 tournament, in Beijing on Sunday.

The top seed made a strong start to the match, breaking serve and holding for 2-0. He withstood three break points before breaking again in the seventh game to seal a one-set lead with commanding play.

Djokovic rode the momentum to break twice in the second set and converted his third match point to improve to a 22-23 H2H record against Nadal.

“This has definitely been my most successful tournament,” said Novak during the trophy ceremony. “Beijing has been a lucky place for me. In 2008, I remember the Olympic Games when Rafa won gold and the tradition of Asian tennis started here. I played a great tournament overall and continued playing well today. Rafa and I have played 45 times and I hope that continues.”

Novak will now travel to Shanghai to compete in next week’s Shanghai Rolex Masters, the eighth ATP World Tour Masters 1000 event of the season.

The Belgrade native won the tournament on two ocasions (2012, 2013). He will open quest for his 25th Masters trophy in the second round against either Martin Klizan or Ze Zhang.