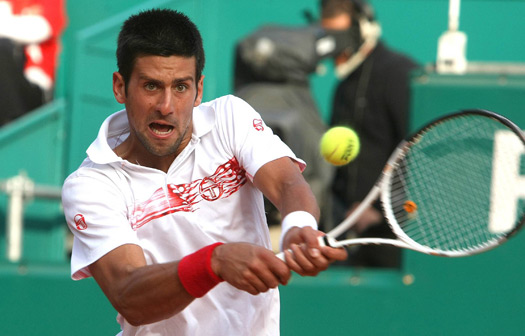 Top-seeded Novak Djokovic failed in attempt to reach the Monte-Carlo Rolex Masters final for the second successive year. He lost to no.6 seed Spaniard Fernando Ferdasco 2-6, 2-6 in 1 hour and 32 minutes.

Novak failed to convert two chances for break in the second game of the opening set. He produced a double fault on break point in the fifth game and failed to win another game in the first set. Verdasco earned three consecutive break points in the seventh game, capitalised on the first and then closed the set 6-2 in 41 minutes.

The Spaniard broke Djokovic’s serve in the third game of the second set. Novak fought back immediately to level the result, but handed the break advantage right back to Verdasco in the fifth game. No.6 seed wrapped up the match by dropping just three points in the final three games to set up an all-Spanish final against defending champion Rafael Nadal.

”This was quite a different performance,” said Djokovic. “He played very good, but I think I made his win much easier because I made so much unforced errors. I wasn’t moving well, I wasn’t feeling well on the court. It’s a bad day. But on the positive side, it’s a semifinal. I have to consider this as a success and move on.”

Novak will next play at the Internazionali BNL d’Italia, an ATP World Tour Masters 1000 tournament in Rome, where he lost to Nadal in the finals last year.