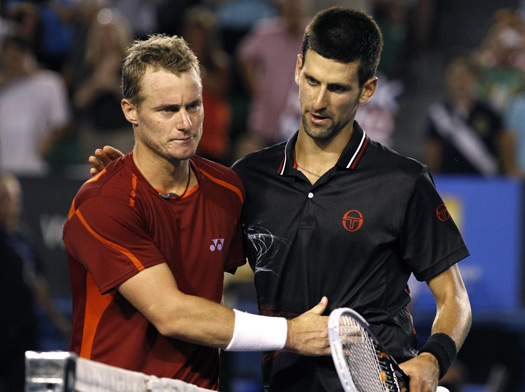 In the last match of the day world number one and defending champion took on Australian hero Lleyton Hewitt for the last spot in the quarter-finals.

Novak started strong, breaking Hewitt in the second and fourth games of the match for 4-0. The Australian broke back once, but Djokovic immediately re-established his double break lead and served out the set 6-1 in 31 minutes.

We saw three consecutive breaks of serve at the beginning of the second set. Nole consolidated his second break to move 3-1 ahead. One more break in the ninth game and the Serbian star had a solid two sets to love lead.

The top seed raced to a 3-0 lead in the third set, but Hewitt did not give up the fight. The former world no.1 broke back in the fifth game and held to level the result to 3-3. Nole lost his rhythm and got broken again in the ninth game. The Australian took the set 6-4 in 56 minutes.

Novak faced a break point in the third game of the fourth set but saved it and held with an ace. The Serbian world no.1 regained his focus, made a crucial break in the sixth game and capitalised on his second match point to advance into the quarter-finals.

“I should have closed it out earlier. I should have held my serve at 3-1 because I was playing well, I was feeling well,” Nole said. “Suddenly I stopped. I didn’t move well anymore. He got back into the match. But look, you know, he had the crowd, he had the big support. It got intense. Especially the start of the fourth set we had some great rallies. It’s good to come out from this match as a winner.”

Nole will play against fifth-seeded David Ferrer for a place in the semi-finals. The Spaniard beat Frenchman Richard Gasquet in straight sets 6-4, 6-4, 6-1.

They played twice last year, Nole won in Madrid quarters, while the Spaniard recorded victory at the ATP World Tour Finals in London.

Novak is into the final eight at Melbourne Park for the fifth straight year, he was triumphant in 2008 (d. Tsonga) and 2011 (d. Murray).