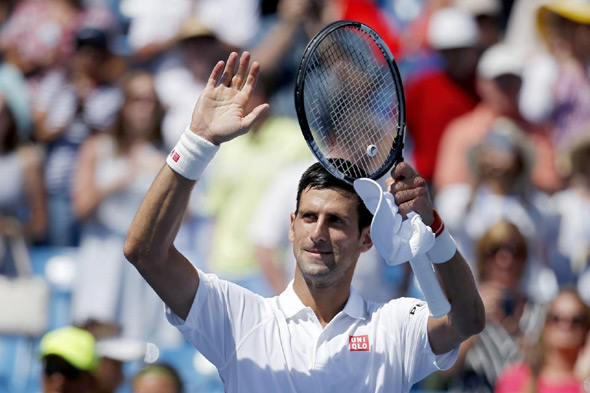 Top seed Novak Djokovic stayed on course in his bid to become the first player to complete the Career Golden Masters on Saturday as he came through in battling fashion to beat qualifier Alexandr Dolgopolov 4-6, 7-6 (5), 6-2 in two hours and 20 minutes.

The world no.1 converted four of five break points and saved five of eight on his serve to reach his fifth final at the Western & Southern Open in Cincinnati.

Dolgopolov converted his break point in the third game, but Nole broke in the sixth to get back on serve. The world no.66 took advantage of Novak’s errors in the seventh game for another break and served it out three games later to move ahead after 32 minutes of play.

Djokovic served for the second set at 5-3, but Dolgo broke back at love to extend the set. The 28-year-old Serb came back from 0-3 in the tiebreak and won it 7-5, forcing a decider.

“I was just more focused, I guess, trying to direct my thoughts only towards the next point and what I can influence,” said Nole. “It’s easier said than done, especially when you’re break points down or 0-3 in the tiebreaker when it all looks like it’s going his way. But I managed to dig deep and refused to give up. Basically the same as against Goffin, and that’s how I won today. I was not very happy the way I played. But, again, win is a win. I managed to do that because I was always there fighting.”

Novak will face six-time former champion Roger Federer on Sunday for the only Masters trophy missing from his collection. The second-seeded Swiss defeated Andy Murray (GBR, 3) 6-4, 7-6 (6). Nole and Roger are tied at 20 wins apiece.