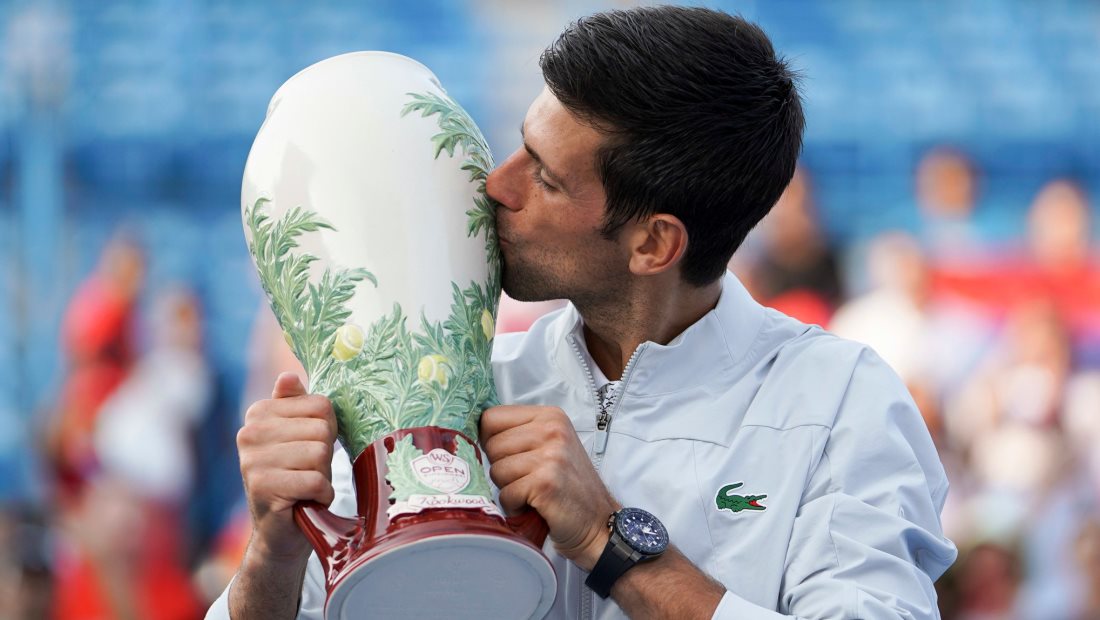 Nole made tennis history on Sunday, becoming the first player to win all nine Masters 1000 titles since the series started in 1990.

Former world no.1 Novak Djokovic claimed his 70th ATP Tour title with a 6-4, 6-4 victory over Roger Federer in the Western & Southern Open final.

The Belgrade native now holds a 24-22 lead in their ATP H2H.

Novak earned a pair of break point chances in the first game and eventually broke for a 4-3 lead, then grabbed the set three games later.

The Swiss opened the second set with an early break for 2-0, but a sloppy game capped by a double fault, handed the break right back. Another break by Djokovic in the seventh game was crucial for the Serb to capture the only ATP Masters 1000 title he’s never claimed.

“It’s a very special moment to stand for the first time with the winning trophy here in Cincinanti,” Djokovic said. “The hard times I went through, it’s been a rollercoaster ride in my career with injury, taking time off and having a surgery earlier this year. This seems a bit unreal to be back at this level. Definitely one of the most special moments in my career. Achievements, making history in the sport that I truly love is a great privilege and honour and something that I’ll be very proud of for the rest of my life.”

Seven-time former titlist Federer was full of praise for Novak after the final: “Congratulations Novak on writing history today. It’s an amazing effort not just today but your whole career to get to this point. It’s an amazing accomplishment. You should be very proud. Well done.”

Nole has won each of the other eight Masters events on at least two occasions and with 31 Masters titles to his name he is second to Nadal (33) on the all-time list.

Before holding the Cincinnati Masters winner’s trophy for the first time, the Serbian star was 0-5 in finals at the Lindner Family Tennis Center. He finished runner-up to Andy Murray in 2008 and 2011, as well as to Roger Federer in 2009, 2012 and 2015.

Novak heads to New York for the US Open, where he lifted the championships trophy in 2011 and 2015. Last year he skipped the event due to elbow injury.

The final Grand Slam tournament of the season will take place at the USTA Billie Jean King National Tennis Center from August 27 to September 9.

With the historic win, Djokovic moves up four spots in the ATP Rankings to no.6, on Monday, August 20.